who is this person?

what language can this person speak?

how often this person uses this language?

language is an important mode of communication between persons of the same culture and of different culture and traditions.if one person knows one or two languages except for his mother language then it would be beneficial for him to succeed in any corner of the world.there are many persons who are well in second language but today I would like to talk about my uncle BS KAHLON who is well versed in English language which attained the status of second most important language in my country.

my uncle has completed the master’s degree in the English language in 1979 from Panjab University Chandigarh.he is very expert in using and speaking the English language and on behalf of this he got the job in Indian army as a professor of English and taught the army corps for five years.but he did not satisfied from that job and quit the job.after that he has selected for the job on behalf of his capability in English language in food supply department as a food supply inspector.he again did not satisfied with this job and quit it.

after that, he started preparing for the Punjab Civil Services.he topped in the English subject in the main exam of PCS and selected as an EXCISE and TAXATION OFFICER.my uncle is fond of English and he always encouraged and motivated me to learn this language.my uncle gave me tuition for English subject and it is because of their great help that I did masters in the English language from Panjab University Chandigarh in 2005.he also taught me the skills of how to speak in the English language with correct pronunciation.i am really proud of my uncle and wish that he may live long.

Q-1: what do mean by language?

Q-2: is it beneficial to learn a language of another culture or a country?

Ans: yes, of course, it is beneficial to learn the language of another culture or country because man is a social animal and he has to depend upon one another for their needs.so to communicate with a person of another country the prior knowledge of that country is required.

Q-3: have you learnt any second language?

Some people consider thinking about and planning for the future to be a waste of time. They argue that people should simply live in the moment. Do you agree or disagree? Use at least one personal example in your response. IELTS result

Old generations often hold some traditional ideas on the correct way of life, thinking and behaviour. However, some people think that it is not helpful for the young generations to prepare for modern life in the future. What’s your opinion? 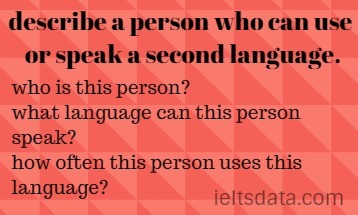