Describe about something that you purchase but didn’t use much.

I belong to a nuclear family that consists of 3 members my father, mother and myself. Even though my both parents are professionals. So we have got all the amenities and luxuries in our premises. Though by the grace of God, my parents usually present me gifts on my every birthday and achievements.

Hence when I was in my high school. An attractive tablet was launched in my country that was an Apple tablet of Sinches screen with silver color and logo of apple on the back.

Certainly, I was very much influenced by that tablet. Because a lot of people were using that because of the new and technology dashing look, I was always wondering to have it.

Initially, I force my parents to purchase it and they mentioned me if you clear your high school with good grades. They will do so. lovingly we went to the local Apple Gadget Store and purchase the dashing silver color tablet of 8 inches screen from there with a logo of the Apple on the back.

Apparently, on the first month of the purchasing of the tablet, I usually use it for a long while and carry it along with me to my university, tuition and shopping centers as well. But  I recognized that it was very hard for me to keep it in my pocket and listen to the calls to the calls as well. Unluckily I was thinking that it’s not a good idea to have it and I stop using it on the regular basis as well.

Lovingly as we have got some other electronic equipment in our premises more likely personal computer, laptop, smartphone and smartwatches. So that tablet was not very much useful and I felt very much boring about it.

eventually, everyone was in my family in busty with other devices. So, no one was very much keen on that tablet in our house. After a short while, I realized that was not the fair decision of my life to spend a lot amount of money to have that tablet and I never use it regularly. So that was the thing that I purchase but I use it occasionally.

Some developing countries invite large foreign companies to open offices and factories in order to help their economy. However, others feel that foreign companies should be shut out and instead the government should help local companies to contribute to economic growth. To what extent do you agree or disagree? 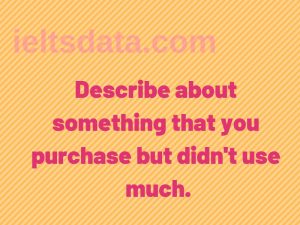