The chart shows the fluctuations in the numbers of international students attending the Sydney International Language Centre in 2001. 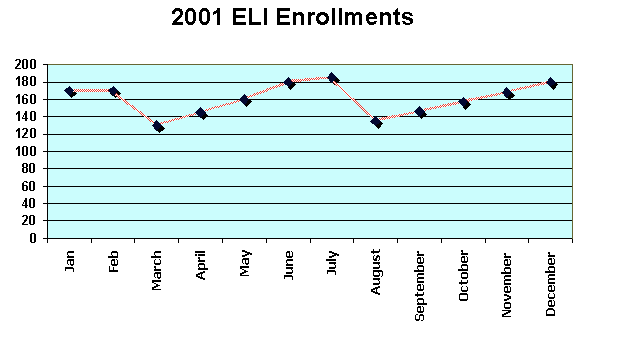 The line graph reveals the information about the count of learners who got enrolled in the international language centre of Sydney in twelve months of the Year, 2001.

Overall, the most striking feature is that the number of students who got admission to International Centre was above  120 in the year 2001.

It is clearly seen from the line graph that at the beginning of the Year the rate of learners was almost 160 which was constant in the following month. Afterward, in the month of March, an abrupt fall had been observed in the number of students.

Moreover, with the passage of time from March to mid of the year,  the count was rose steadily and reached at its highest level, if compared with all the given numbers that were approximately 180. Then it followed the same trend as in the month of February and the rate was almost 140. After the month of July, the count of students rose steadily and followed continuous growth in their figure till the end of the year and the number of students was as same as in the month of July.