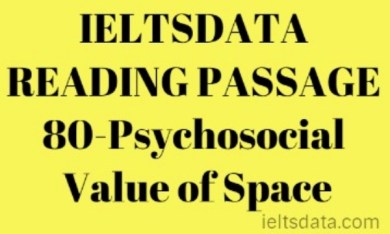 Reading passage has seven paragraphs, A-G. Choose the correct heading for each paragraph A-G from the list below
List of Headings

A. What would a building space look and feel like if it were designed to promote psychological and social well-being? How would it affect the senses, the emotions, and the mind? How would it affect behavioral patterns? For insights, it is useful to look not at buildings but at zoos. Zoo design has gone through a radical transformation in the past several decades. Cages have been replaced by natural habitats and geographic clustering of animals. In some places, the animals are free ranging and the visitors are enclosed in buses or trains moving through the habitat. Animals now exist in mixed species exhibits more like their natural landscapes. And, as in nature, the animals have much greater control over their behavior. They can be on view if they want, or out of sight. They forage, play, rest, mate and act like normal animals.

B. What brought about this transformation in philosophy and design? A key factor was concern over the animals’ psychological and social well-being. Zoos could keep animals alive but they couldn’t make them flourish. Caged animals often exhibit neurotic behaviors – pacing, repetitive motions, aggression, and withdrawal. In one more example, an animal psychologist was hired by the Central Park Zoo to study a polar bear that spent the day swimming in an endless figure of eights in its small pool. This was not normal polar bear behavior and the zoo was concerned about it. After several days of observation, the animal psychologist offered a diagnosis. The bear was bored. To compensate for this unfortunate situation, the zoo added amenities and toys to bear’s enclosure to encourage exploration and play.

C. Are there lessons that we can apply To build design? Some experts believe so. For example biologist Stephen Boyden (1971) defines the optimum healthy environment as ‘the conditions which tend, promote or permit an animal optimal psychological, mental and social performance in its natural or “evolutionary” environment. Because humans evolved in a natural landscape, it is reasonable to turn to the natural environment for clues about performance patterns that may be applicable to building design. Drawing on habitat selection theory ecologist Gordon Orians argues that humans are psychologically adapted to and prefer landscape features that characterized the African plains or savannah, the presumed site of human evolution. Although humans now live in many different habitats, Orians argues that our species long history as mobile hunters or gatherers on the African savannahs should have left its mark on our psyche. If the ‘savannah hypothesis’ is true we would expect to find that humans intrinsically like and find pleasurable environments that contain the key features of the savannah most likely to have aided our ancestors’ survival and well being.

D. Although Boyden distinguishes between survival and well-being needs, they often overlap. For example, people clearly need food for survival and health. However, food often serves as the basis for bonding and relationship development. The ritual of sitting around a fire on the savannah or In a cave telling stories of the day’s events and planning for tomorrow may be an ancient carryover from Homo sapiens’ hunting and gathering days. According to anthropologist Melvin Konner, the sense of safety and intimacy associated with the campfire may have been a factor in the evolution of intellectual progression as well as social bonds. Today’s hearth is the family kitchen at home, and the community places, such as cafes and coffee bars, where people increasingly congregate to eat, talk, read and work.

E. A growing body of research shows that building environments that connect people to nature are more supportive of human emotional well being and cognitive performance than environments lacking these features. For instance, research by Roger Ulrich consistently shows that passive viewing of nature through windows promotes positive moods. Similarly, research by Rachel Kaplan found that workers with window views of trees had a more positive outlook on life than those doing similar work but whose windows looked out onto a parking lot. Connection to nature also provides mini mental breaks that may aid the ability to concentrate, according to a research by Stephen Kaplan. Terry Hartig and colleagues report similar results in a field experiment. People in their study who went for a walk in a predominantly natural setting achieved better on several office tasks requiring concentration than those who walked in a predominantly built setting or who quietly read a magazine indoors.

F. Studies of outdoor landscapes are providing evidence that the effects of nature on human well being and health extend beyond emotional and cognitive functioning to social behavior and crime reduction. For instance, Francis Kuo found that outdoor nature buffers aggression in urban high-rise settings and enhances the ability to deal with demanding circumstances. He also reported that planting trees in urban areas increases sociability by providing comfortable places for residents to talk with one another and develop friendships that promote mutual support.

G. A natural perspective also contributes important insights into comfort maintenance. Because people differ from one another in many ways (genetic, cultures, lifestyles) their ambient preferences vary. Furthermore, a given person varies over time depending upon his or her state of health, activities, clothing levels and so forth. For most of human history, people have actively managed their surroundings as well as their behaviors to achieve comfort. Yet buildings continue to be designed with a ‘one size fits all’ approach. Very few buildings or workstations enable occupants to control lighting, temperature, ventilation rates or noise conditions. Although the technology is largely available to do this, the personal comfort systems have not sold well in the marketplace, even though research by Walter Kroner and colleagues at Rensselaer Polytechnic Institute shows that personal control leads to significant increases in comfort and morale.
Questions 8-13
Look at the following people (Questions 8– 13) and the list of theories below. Match the person with the correct theory A-I. You may use any letter more than once.
8. Gordon Orian
9. Melvin Konner
10. Roger Ulrich
11. Stephan Kaplan
12. Francis Kuo
13. Walter Kroner
List of theories
A. Creating a green area can stimulate a sense of community.
B. People need adequate living space in order to be healthy
C. Natural landscape can both relax and sharpen the mind
D. Cooking together is an important element In human bonding,
E. People feel more ease if they can adjust their environment.
F. Looking at a green environment improves people’s spirits.
G. Physical exercise improves creative thinking at work.
H. Man’s brain developed partly through regular association with peers
I. We are drawn to places similar to the area where our species originated.