I belong to the joint family that consists of five members. My grandfather, grandmother, father, mother and myself and I am a student of high school.

Although I still remember last year I was watching discovery channel and there was documentary over there the British colony all around the world. Even though at that time, the name of my nation was also mentioned. Though and after that I was very much curious to know about the history of my nation. For that, I selected the suitable person that was my grandfather.

Hence because he was a farmer and freedom fighter as well before the independence.  Certainly and I clinch the right opportunity to have a great conversation along with my grandfather about the history of my nation. Apparently and he mentioned me the story of the rising sun of the British empire and when they enter in our nation 200 years back from the independence.

Gradually they rule all our federal offices and implemented the English as the first language in all around the nation.

Probably they start exporting the wealth and valuable items to the European countries from India.

Unluckily they start treating the civilians of my nations as a slave and they really have a bad attitude with them all the times like treating them like servants and not talking to them very much properly. Eventually, when everything was out of control, people were very much against them and they decided to have freedom from them and numerous freedom fighters, leaders and soldiers start contributing their efforts for the freedom of the nation by the through revenge.

Gradually and my grandfather also indulge in numerous freedom movements more likely strikes, a street march, and motivational conferences as well. Gratefully by having all those efforts we clinch the opportunity to have the freedom from British on 15th of August 1947.  Gratefully that was the happiest moment of the history of our nation. Still, people celebrate it every year on that day in my country with great enthusiasm that was period of the history ion which I am very much interested.

In the last century when a human astronaut first arrived on the Moon he said: “ It is a big step for mankind”. But some people think it makes little difference to our daily life. To what extent do you agree or disagree? 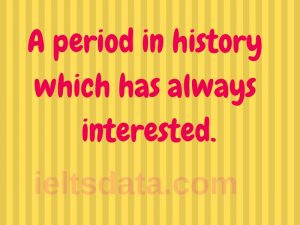