Describe a time when you found something that someone lost.

Although I belong to Hoshiarpur city that is located in the province of Punjab and my city leads in the literacy rate in my state.

Even though by the grace of God, I spend my whole education career from the reputed school in my hometown known as Mount Carmel that is affiliated to ICSE. stream.

Though after the clearance of high school all my friends were moving from there further education in several parts of the country and overseas countries as well. Hence because of that separation, we reputated five-star Hotel in my hometown known as Radisson. Certainly, it was a long weekend and we all gathered in a hotel sharp at 7 p.m in the evening with a nice dress code.

Luckily the hotel authorities arrange the Disco Jockey from Bollywood and all the boys and girls were dancing on the beats with great enthusiasm. Gradually after that, we had the great photo session by the skilled photographer over there and there was an announcement for a cake ceremony after that.

Unluckily on the moment of the ceremony, one of my mat Andrew try to capture the pictures over there of the cake ceremony and he recognized that his phone was missing from his pocket and he was in a deep picnic. At that moment, he was shocked and he was not wondering what to do because the phone was very much expensive. He was very much sad on that situation.

Eventually, we suggested him to have a word wi8th the duty manager and he did so. And the manager checked every CCTV camera but unluckily there was no clue.

Gratefully the manager referred him to the nearest police station to lodge the FIR over there and he went over there and he did so. After that, we all friends were trying our best to fetch the phone in the hotel. And we did our best.

hence after that straightaway, I went to my friend Andrew’s house to return his phone and the good news and when I provided him the phone, he was on the cloud nine and he  hugged me tightly and there was a great strong bonding between both of us that was the time when I found something that my friend lost. 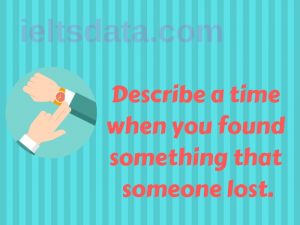