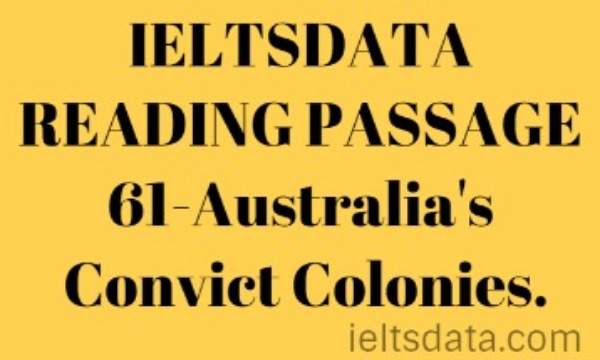 A
The 1700s in Britain saw widespread poverty and rising crime, and those convicted of crimes faced harsh penalties. including transportation to one of Britain‘s overseas colonies. Since 1615, convicts had been transported to Britain’s American colonies, both as punishment and a source of labour, but this practice was halted by the Revolutionary War in America (1775-1783). The British government decided to establish a new prison colony, and Botany Bay in New South Wales was chosen as the site. (Captain Cook, exploring the southeast coast of Australia in 1770, had named the land New South Wales and claimed it for Britain.) Between l787 and 1868, almost 160,000 convicts, of whom about 25,000 were women, were sent to Australia to serve sentences ranging from 7 years to life.
B
Eleven ships set sail from England in 1787 to take the first group of about 750 British convicts to Australia. The fleet reached Botany Bay in January 1788, but nearby Sydney Cove was selected as a more suitable site for the new settlement, which later became the city of Sydney. The first few years were difficult, with severe food shortages; by 1792, however, there were government farms and private gardens. Convicts worked on these farms, or on construction projects such as building roads and bridges. Although the settlement was a prison colony, few convicts served their sentences in jail. They lived in houses they had built themselves, and established families, businesses and farms. A settlement was also established on Norfolk Island, where some convicts were sent for crimes committed after arrival in the colony. Two more settlements were established on Van Diemen‘s Land (now Tasmania), in 1803 and 1804.
C
Convicts not Involved in public work were assigned to free settlers, providing labour in exchange for food, clothing and shelter. Some masters treated the convicts cruelly, and the punishment of convicts, particularly in the early days, could be arbitrary and savage. Lachlan Macquarie, governor of New South Wales from 1809 to 1819, adopted a more humane approach. He encouraged convicts to reform by rewarding good behaviour, even granting pardons to convicts before their sentence was completed. These emancipists, as they were called, were given land and government assistance to help them start farming. His policies were unpopular both with British authorities and wealthy free settlers, however, and the next governors were under orders to ensure that life for convicts became much stricter and more controlled. There were harsher punishments for second offenders, such as working in the ‘iron gangs’ where men were chained together to carry out exhausting work on the roads or being sent to penal settlements where punishment was deliberately brutal so that it would act as a deterrent.
D
In the early years of settlement, the convicts greatly outnumbered free immigrants and settlers. In 1810, convicts made up almost 60 percent of the population, and over 20,000 new convicts arrived between 1821 and 1830. Even in 1831, convicts still comprised 45 percent of the population, with ex-convicts and emancipists making up another 30 percent. 25 percent of the population now consisted of people born in the colonies, and free people outnumbered convicts
E
The first group of free settlers had arrived in Australia in 1793 to seek their fortune in the new land. Their numbers grew, with about 8,000 free settlers arriving in the 1820s to take advantage of free land grants and cheap convict labour. In 1831, the British government offered money to support new settlers, hoping to attract skilled workers and single women as immigrants. Between 1831 and 1840, more than 40,000 immigrants arrived in Australia.
F
During the 1820s there was a lengthy campaign to win certain rights for emancipists, which was opposed by wealthy free settlers. In the 1830s, free Immigrants to New South Wales and Van Diemen’s Land, unhappy about living in a prison colony where civil liberties were restricted and convict labour resulted in low wages, increasingly voiced their opposition to transportation. Again, wealthy landowners disagreed, but a growing number of reformers in England were also

opposed to convicting transportation. In 1838, a committee set up by the British Parliament recommended that the government end transportation to New South Wales and Van Diemen’s Land, and abolish assignment. The British duly abolished assignment, and transportation – at least to New South Wales – was halted in 1840.
G
Transportation continued, however, to other colonies and settlements, in the 1840S, most British convicts were sent to Van Diemen’s Land, where the British government introduced a convict system based on stages of reform, with the convicts gaining increasing levels of freedom for continued good behaviour. Transportation to the eastern colonies was abolished in 1852. In contrast, the convict system in Western Australia began in 1850, at the request of the Western Australian government, and continued until 1868. Convicts served part of their sentences in Britain before being transported to the colony, where they worked on badly-needed public construction projects under a system similar to that tried in Van Diemen’s Land.

Questions 1-3
Which THREE of the following statements is true of free settlers in the Australian prison colonies, according to the text? Choose THREE letters A-H. NB, Your answers may be given in any order.
A. They were mainly skilled Workers and single women.
B. They all welcomed Governor Macquarie’s policies.
C. 25 percent of them were born in the Colonies.
D. 160,000 of them went to Australia between 1787 and l868.
E. 8,000 of them arrived in Australia in the 1820s.
F. They established families, businesses and farms.
G. Convicts who were assigned to them provided them with labour.
H. They campaigned in favour of emancipist rights.
Questions 4-9
Reading Passage 1 has seven paragraphs, A—G. Choose the correct heading for paragraphs B—G from the list of headings below.
List of Headings
i. Free settlers
ii. Transportation of convicts
iii. The end of transportation
iv. Convict life
v. The colonial population
vi. The treatment of convicts
vii. Opponents of transportation
viii. The first settlements
Example Paragraph A – ii (answer)
4. Paragraph B
5. Paragraph C
6. Paragraph D
7. Paragraph E
8. Paragraph F
9. Paragraph G
Questions 10- 13
Complete the notes below. Write NO MORE THAN THREE WORDS for each answer.
Australia’s Convict Colonies
Events preceding first settlement
 1615 – convicts first transported to 10………. Controlled by Britain
 1770 – Cook claims SE Australian coast for Britain, calling it 11……………………
 1775 – 1783 – Revolutionary War in America halts transportation there
 1787 – Botany Bay was chosen as the site for new 12………..; first convict fleet sets sail
 1788 – fleet reaches Botany Bay but 13……………….. chosen instead