Describe a friend or person who recently got success.

even though by the grace of God, I pursued my whole educations from the reputed school in my hometown known as St Joseph and that is affiliated to ICSE stream. Though by the grace of God, one of my cousin known as Tom was also studied along with me in the course of Hotel Management in the same education together and we had a great bonding with each other as best buddies. Hence I still remember, after completion of the high school, I decided to pursue my bachelors and my cousin Tom decided to work for in Hotel Industry. Certainly, because of the heavy burden of the studies, I was very much busy with my academics.

Surprisingly After six months, I received a call from an unknown international number. Luckily when I attended that call, I recognized that was my cousin Tom’s number and I was on the ninth cloud by happiness.

Basically, we had the deep happily conversation with each other and he mentioned me that he clinch the job in the reputed five-star hotel in Singapore Known as Hilton on orchard Read as a headwaiter indeed. Lovingly he also mentioned me that he is living his life very much happily over there because the Hotel authorities provided him numerous facilities more likely rich salary, transportation, accommodation, international Sim XCard and or fare as well after every six months. Eventually, I was very much impressed by the success of my cousin or friend and I was also wondering to work over there back in Singapore.

Gratefully by my perspective, success is very much necessary for every human to grow that was the time when my friend or relative get success.

Recent studies have shown that overweight people tend to eat ‘junk foods’ that are high in unhealthy fats. Some people argue that an increase in the price of such foods will serve as a deterrent and thus reduce the number of overweight people. Do you agree or disagree? Share examples from your own life to support your point of view. IELTS result 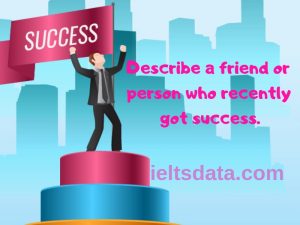