what is the language?
where is it spoken?
what you think it would be difficult?

education is the third eye of a person.it is a storehouse of knowledge.withoutneducation a person would be described as a blind.so education is an important part of every person life because it helps him to succeed in life.i have done master of arts in the English language.i have a dream to settle abroad in Canada and for this, I am doing all the required things.two languages are required to learn out of which one is English and other is French.i have already done IELTS a few months ago and now I would like to learn the French language.for this, I am searching an expert tutor who teaches me this language.

French is an official language in 29 countries across five different continents, most of which are members of the Organisation Internationale de la Francophonie (OIF), the community of 84 countries which share the official use or teaching of French. It is spoken as a first language in France, Canadian provinces of Quebec, Ontario and New Brunswick as well as other francophone regions, Belgium, western Switzerland, Monaco, parts of the United States, and by various communities elsewhere.

French is the fourth most widely spoken mother tongue in the European Union.For Europeans who speak other languages natively, approximately one-fifth are able to speak French as a second language.French is the second most taught foreign language in the EU. French is also the tenth most spoken language in the world, behind Mandarin Chinese, English, Hindi, Spanish, Arabic, Malay, Russian, Bengali, and Portuguese, and is the second most studied language worldwide.

Q-1: which language is easy french or English?

Ans: I belong to India and English is the official language in some states.but it is used in every state of India.i teach the English language in the school curriculum also.so I am familiar with this language.but on the other hand french is not used in India so I have no acquaintances with this language.so it seems to be difficult to me than English.

Q-2: what is the benefit to learn the English language?

Ans: it is well known that English is the worldwide language.it is speaking in almost all countries of the world.so it is an important source of communication between people of different cultures.if one knows the English language then he does not face any difficulty to go to any part of the world.

Q-3: what is your mother language?

Ans: I belong to the Punjab state of India.so my mother language is Punjabi which is written in Gurmukhi script.it is called Gurmukhi because its co-founder is the second guru of Sikh religion Shri Guru Angad Dev Ji.

In the past, people wore traditional clothes, spoke languages and practised activities as dictated by their regional culture. These days, the world’s cultures resemble one another quite closely. Do you think this is a positive or negative development?

Some children find some subjects such as mathematics and philosophy too difficult to learn, so some people argue that those subjects should be optional rather than compulsory. To what extent do you agree or disagree? 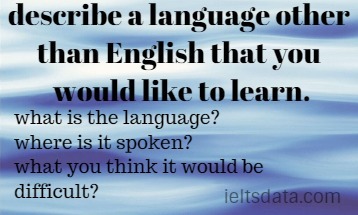