What was this news?

When and Where you heard it?

How did you hear about it?

Explain why you think it was good news?

the news is one of the important sources of knowledge.it plays an important role in spreading daily activities in the society .near about two decades ago when the internet and mobile services were not fully developed, the letter was the most important and famous source of communication.but after the advent of technology internet facilities and mobile phones have come into the market and it decreases the significance of letters for people.people prefer to use emails and other social websites and apps for conveying their message to each other.nowadays letters are only used for official purposes.today I would like to talk about an important news which I received a few months ago.it was an email about my selection for the post of excise and taxation inspector.

the government of Punjab had given advertisement about filling the vacancies for the post of excise and taxation inspector.I applied for that post because I had fulfiled all the requirements for the post.after a month the PSSSB announced the date of the test and I appeared in the exam.i was very happy because the paper was very easy and I hoped at that might be I would be selected for the post.after one month when I was doing my work on my laptop I received an email from PSSSB.when I opened IT.it was an email from the PSSSB.there was no limit of my happiness when I read the news because I was selected for the post.

the board has mentioned the date of when I have to consult with the chairman of SSSB.I  share this happiness with my family and friends and they congratulated to me.

Q-1: what source you use to read the daily news?

Ans: I read the newspaper every day for the current news.besides this I also watched tv and search news on the internet also.for this, I use my laptop as well as mobile also.internet is the easy, reliable and cheap source to get news.

Ans: I read all types of news in the newspaper.i read the current news of national and international importance.besides this, I read advertisements regarding the new vacancies opened by the government.

Q-3: what is the breaking news which you read recently in the newspaper?

Ans: the breaking news is about the release of the controversial film Nanak Shah Fakeer.the Sikh organizations told that this film hurt the religious sentiments of the Sikhs.so the supreme organization of the Sikhs Shiromani Gurdwara Parbandhak Committee and Jathedars of five Takhats banned this film.

Some people believe that studying literature is important for individual character building while others think it is a waste of time. Discuss both points of view and provide your own opinion.

Because of the global economy, many goods including what we use as daily basics produced by other counties have to be transported for a long distance. To what extent do the advantages outweigh the disadvantages? 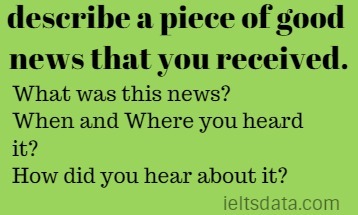