who is the person?

what are his/her achievements?

why do you admire him/her?

people are not popular since their birth.but they become popular in society with their hard work and talents.sports play an important role in every part of the world.many countries have achieved great success in this format like USA, China, England, Japan, and India.every country is famous for its specific sports .india is famous for the game of cricket.so there are a number of players who are famous not only in India but all over the world.i like many players but among them, my most favourite player whom I admire is Virat Kohli.he is a legend in Indian cricket.

he started playing cricket at the age of 16.he belong to the capital of India new Delhi.he came into light when the under 19 team won the under 19 world cup under his leadership.after that he never looked back.he is known as a consistent player in the international cricket.he is on the first place in the ICC international ranking of one day cricket from a long time.he is now became the captain of Indian cricket team  on the basis of his all-around performance. he has also hit double centuries in one day cricket many times.he has won many records in Indian cricket.

I admire him because, in spite of being a star, he is deep to earth person.he is known for his honesty, cool and calm behaviour, tolerance power.being the captain of Indian cricket team he proved himself in such a way that some sports management of other countries look helpless in front of his captaincy and sometimes they have to change the captain of their team.he is a sociable person and always trying to do social work whenever he gets a chance.he has also won many national and international sports awards.he was married to the beautiful actress of Bollywood Anushka Sharma last year.he organised his marriage in a grand way.

Q-1: what is the role of sports in a country?

Ans-sports have a great role to play in the economy of a country.it gives name and fame not only to the players but to the country also.a person can highlight the name of his country all over the world via his game.

Q-2: is the technology brought changes in sports?

Ans: yes, definitely technology brought about changes in sports.for instances, in the game of cricket, there are huge changes like the entry of the third umpire to take tough decisions which were unable to take for the first umpire in an earlier time.

Q-3: what role sports could play in the life of a sportsperson?

Ans: sports could play a crucial role in the life of a sportsperson.it could give name and fame not only to a person but to the country also.a person could adopt sports as his career.it could also help him to keep himself fit and healthy.

describe someone you know who recently moved to new accommodation.

The number of TV programs is growing day by day. Some people say that it is good as it gives people more choices, while others say it affects the quality of TV programs. Discuss both and give your opinion. 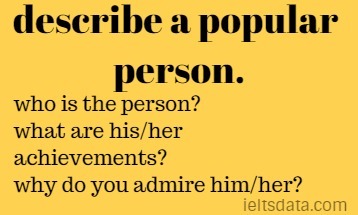