Although I belong to a nuclear family that consists of three members my father, mother and myself.

Even though by the grace of God, I pursued my high school from the reputed school in my hometown known as Mount Carmel Christian Catholic school that is affiliated to ICSE stream.

Though by the grace of God, I met with numerous teachers over there. But the teacher I admire the most as a person as well as Mr. Peter who was my English teacher over there.

Hence Mr. Peter was very much tall, handsome and attractive as well.

Certainly, his height was around 6feet and his physique was very much athletic.

Luckily his skin color was fair along with blue eyes and golden long hair.

gradually his dressing sense was very much fabulous. He loves to wear trousers shirts, tie and leather shoes in summers and denim coat, blazer and long jackets in the winter season.

Apparently, despite from English teacher, he was a good sports coach and he always teaches and shows his sports skills to us.

Luckily he looks very much dashing in the tracksuit shorts, T-shirts and sports trainers as well.

Ap[part from education, he is a great social worker in the hometown. After the school hours, he provides free tuition or coaching of English to the needy students and sometimes he donate his used books indeed.

Lovingly he usually indulges in numerous social welfare activities in my hometown more likely blood donation, free kitchen and keeping the city clean and green because I usually saw his picture in the newspaper and watch him in the local news channels as well.

Eventually, he is very much down to earth and religious person because he spends a couple of hours every Sunday in the Mother Mary Catholic Christian church in my hometown.

Luckily my hometown is blessed with a handsome knowledgable and talented person like Mr. Peter.

Gratefully by my perspective, he is the rising star of my city.

LBL I really admire Mr. Peter as a teacher and a handsome and social welfare person as well.

Describe a life-changing experience you have had Ielts cue cards 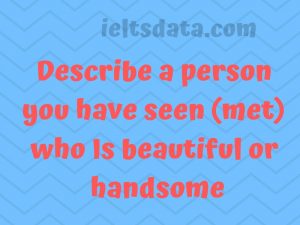 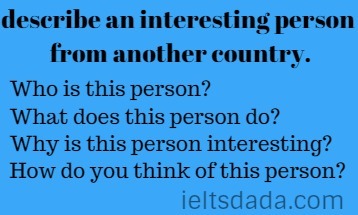 describe an interesting person from another country. Who is this … 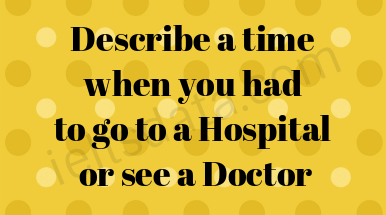