Questions 1-5
Reading Passage has 6 sections A—F. Choose the most suitable heading for each section from the list of headings below. Write the appropriate numbers (i-ix) in boxes 1-5on your answer sheet. Note: There are more headings than sections so you will not use all of them. You may use any of the headings more than once.
Example E Answer ix

B. Research shows that pets play an important role in teaching children about sharing, caring, communication and responsibility. They also act as companions and protectors, stress relievers and in some cases help to foster family cohesion. While pets are traditionally associated with family-type households, they are just as important to households without children; indeed they are often surrogates for children in childless families. This applies particularly to the elderly, who usually form very close associations with their pets. In an era when the population is aging and more people are living alone, pets can provide valuable relief from loneliness.

C. Urban pet management has been the subject of extensive debate among veterinarians and those involved in local government for some time. Part of the reason is that people complain more readily about other people’s pets than ever before. Emphasis on urban consolidation has meant that smaller homes and back gardens and multi-dwelling developments not only discourage people from owning pets but also place greater demands on scarce public open space. Pet owners may face tougher restrictions from either their local council or resident management committee.

D. The term socially responsible pet ownership has emerged to describe a set of responsibilities to which pet owners are now expected to adhere. In meeting their responsibilities pet owners need to consider:
 Providing an enriching environment to reduce unwanted behavior; e.g. excessive barking.
 Confining dogs to their premises. The advantages of this include protection from catching the disease, being run over and fighting. Ideally, cats should be confined to the house at night for their own protection where practicable.
 Training pets to alter unacceptable behavior.
 Exercising dogs, especially if they spend long periods on their own.

E. It might be tempting to prescribe different pets for different types of housing. Some people already have firm views about pets and housing type, mostly in relation to dogs, e.g. that the only environment for a dog is in conventional detached housing or that a “big” dog is only suitable in the country. However, suitability is as much dependent on the quality of space as it is on the quantity.

A dwelling that overlooks areas of activity is ideal for pets because it increases the amount of stimulation that can be received from the property, e.g. dwellings that overlook a park or are adjacent to a busy street. This is one way to alleviate boredom and the negative behaviors that sometimes result.
Preferably a dog should have access to some outdoor space. Open space is not essential for a cat provided an enriching environment is maintained indoors, e. g. a bay window or internal fernery. Ideally, dogs should have access to all areas of open space on a property. On the whole, a dog’s behavior is likely to be better if he or she can see the street. Although the dog may bark at passers-by in the street, there will be less likelihood of excessive barking that might arise through boredom. Providing a dog with surveillance of the street also enhances public security – a very positive benefit.

F. With adequate fencing, a dog will be confined to the property. Cats are less easily constrained and are discussed below. The standard paling fence will restrain almost all dogs. They are recommended for side and rear boundaries. Solid front fences limit the view of the outside world and are not recommended. The dog will tend to be less aroused by sound stimuli if he or she can see passers-by or activities in the street. However, it is important to ensure that the dog cannot get through the fence. Furthermore, all gates should be fitted with a return spring self-closing device.

Cats are not as easily restrained as dogs as they are agiler and have quite different notions of territoriality. Mostly this does not create a problem, although difficulties may arise in environmentally sensitive areas where cats may prey on wildlife. It is recommended that cats be confined to the house at night for their own protection.
The pleasures and benefits of pet ownership should be available to everyone. However, owning a pet brings with it responsibilities to which we are increasingly being called to adhere. It is hoped that the guidelines will encourage people to think about pets in decisions about residential and community development. If they do, pet ownership will not be prejudiced by the push or urban consolidation.
Questions 6-11
Do the following statements reflect the claims of the writer of Reading Passage? Write:
YES if the statement agrees with the writer
NO, if the statement contradicts the writer
NOT GIVEN if there is no information about this in the passage
6. Research shows that more than half of Australian families have both a cat and a dog.
7. Many pets get lonely when their owners are away from home.
8. Although having outdoor space available is good for cats and dogs, it is not absolutely essential.
9. While fences are good for keeping animals off the streets, they should not block the animal’s view of street activities.
10. Dogs should be encouraged to bark at everybody going by.
11. It is safer for cats if they are kept in the house at night.
Question 12
Which of the following statements A-D best reflects the views of the writer of Passage
A. Although many people keep dogs in the cities, this is not truly a suitable environment for them.
B. Although the city is less satisfactory than the country for keeping pets, it is still recommended that families with children and older people have a pet of some kind.
C. Keeping pets in cities is appropriate so long as the owners ensure they do not annoy others.
D. Having a pet in the city can be a rewarding experience for all concerned provided sensible precautions are taken to ensure the pet has a satisfactory environment. 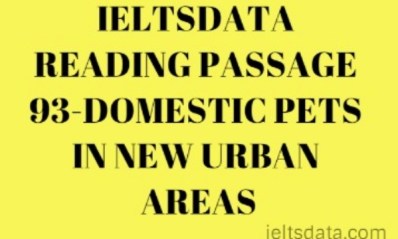