Reading Passage has 5 sections A-E. From the list of headings below choose the most suitable heading for sections B to E. Write the appropriate numbers (i-viii) in boxes 1-4on your answer sheet. Note: There are more headings than sections so you will not use all of them. You may use any of the headings more than once.

A. Radioactivity occurs naturally. The main source comes from natural sources in space, rocks, soil, water and even the human body itself. This is called background radiation and levels vary from place to place, though the average dose is fairly constant. The radiation which is of most concern is artificial radiation which results from human activities. Sources of this include the medical use of radioactive materials, fallout, and contamination from nuclear bomb tests. discharges from the nuclear industry, and the storage and dumping of radioactive waste.

B. While artificial radiation accounts for a small proportion of the total, its effects can be disproportionate. Some of the radioactive materials discharged by human activity are not found in nature, such as plutonium, while others which are found naturally may be discharged in different physical and chemical forms, allowing them to spread more readily into the environment, or perhaps accumulate in the food-chain.

For all these reasons simple comparisons of background and artificial radioactivity may not reflect the relative hazards. Equally important, it has never been shown that there is such a thing as a safe dose of radiation and so the fact that we are progressively raising global levels should be of as much concern to us as the possibility of another major nuclear disaster like Chernobyl. Every nuclear test, nuclear reactor or shipment of plutonium means an additional and unnecessary health risk.

C. In general, the effects of radiation can be divided into those which affect the individuals exposed and those which affect their descendants. Somatic effects are those which appear in the irradiated or exposed individual. These include cancer and leukemia. Hereditary or genetic effects are those which arise in subsequent generations.
Many of the elements which our bodies need are produced by the nuclear industry as radioactive isotopes or variants. Some of these are released into the environment, for example, iodine and carbon, two common elements used by our bodies. Our bodies do not know the difference between an element that is radioactive and one which is not. So, radioactive elements can be absorbed into living tissues, bones or the blood, where they continue to give off radiation. Radioactive strontium behaves like the calcium-an essential ingredient in our bones — in our bodies. Strontium deposits in the bones send radioactivity into the bone marrow, where the blood cells are formed, causing leukemia.

D. There are three principal effects which radiation can have on cells: firstly the cell may be killed; secondly the Way the Cell multiply may be affected, resulting in cancer; and thirdly damage may occur in the cells of the ovaries or testes, leading to the development of a child with an inherited abnormality.
In most cases, cell death only becomes significant when large numbers of cells are killed, and the effects of cell death therefore only become apparent at comparatively high dose levels. If a damaged cell is able to survive a radiation dose, the situation is different. In many cases, the effect of cell damage may never become apparent. A few malfunctioning cells will not significantly affect an organ where the large majority are still behaving normally.

However, if the affected cell is a germ cell within the ovaries or testes, the situation is different. Ionizing radiation can damage DNA, the molecule which acts as the cell’s ‘instruction book’. If that germ cell later forms a child, all of the child’s cells will carry the same defect. The localized chemical alteration of DNA in a single cell may be expressed as an inherited abnormality in one or many future generations.
In the same way that a somatic cell in body tissue is changed in such a way that it or its descendants escape the control processes which normally control cell replication, the group of cells formed may continue to have a selective advantage in growth over surrounding tissue. It may ultimately increase sufficiently in size to form detectable cancer and in some cases cause death by spreading locally or to other parts of the body.

E. While there is now broad agreement about the effects of high-level radiation, there is controversy over the long-term effect of low-level doses. This is complicated by the length of time it takes for effects to show up, the fact that the populations being studied (bomb survivors, people exposed to nuclear tests or workers in the nuclear industry ) are small and exact doses are hard to calculate.
All that can be said is that predictions made about the effects of a given dose vary. A growing number of scientists point to evidence that there is a disproportionately high risk from low doses of radiation. Others assume a directly proportionate link between the received dose and the risk of cancer for all levels of dose, while there are some who claim that at low doses there is a disproportionately low level of risk.
Questions 5-10

Classify the following as linked in the passage to:
BR Background Radiation
AR Artificial Radiation
N Neither
B Both
Write the appropriate letters in boxes 5-10on your answer sheet.
5. produced by the human body
6. involves only safe amounts of radiation
7. is used for medical purposes
8. includes plutonium
9. produces a constant level of radiation
10. can enter the food chain
Questions 11-16
Complete the summary of Section D of Reading Passage below. Choose your answers from the box below the summary and write them in boxes 11—16on your answer sheet. Note: There are more words/phrases that you will need to fill the gaps. You may use a word or phrase more than once if you wish.
SUMMARY
Radiation can affect an organism by damaging (11)……… which may then die or malfunction. If the (12)……. affected in this way is small, the effect will not be too drastic and may not be noticeable. Alternatively, the (13)……. may grow uncontrollably and form cancers, in which case the organism is likely to die.
if the DNA in a germ cell in the ovaries or testes is affected, and (14)…….. originating from that (15)….. may display ..(16).., which can, in turn, be passed on to further offspring.
offspring 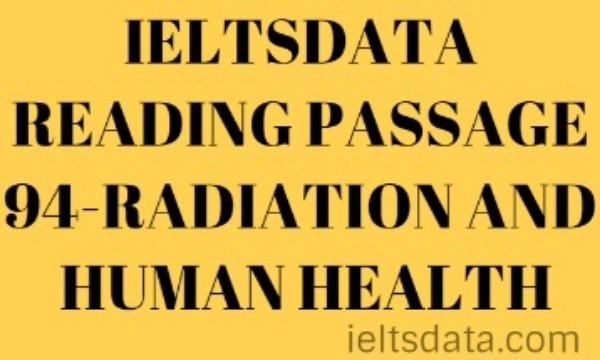