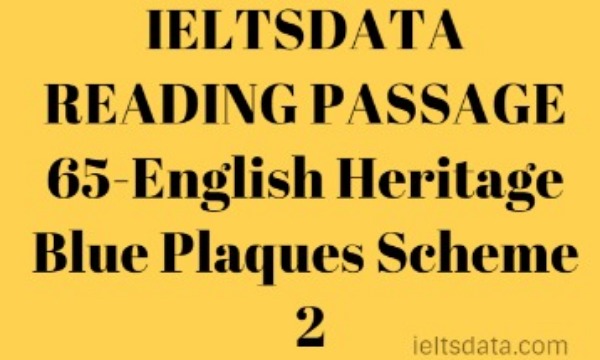 A. The blue plaques scheme has been running for over 140 years and is one of the oldest of its kind in the world. The idea of erecting ‘memorial tablet was first proposed by William Ewart MP in the House of Commons in 1863. It had an immediate impact on the public imagination, and in 1866 the Society of Arts (later Royal Society of Arts) founded an official plaques scheme. The Society erected its first plaque – to the poet Lord Byron – in 1867. In all, the Society of Arts erected 35 plaques; today, less than half of them survive, the earliest of which commemorates Napoleon III (1867). In 1901, the plaques scheme was taken over by London County Council (LCC), which erected nearly 250 plaques over the next 64 years and gave the scheme its popular appeal. It was under the LCC that the blue plaque design as we know it today was adopted, and the selection criteria were formalized. On the abolition of the LCC in 1965, the plaques scheme passed to the Greater London Council (GLC). The scheme changed little, but the GLC was keen to broaden the range of people commemorated. The 262 plaques erected by the GLC include those to figures such as Sylvia Pankhurst, campaigner for women’s rights; Samuel Coleridge-Taylor, composer of the Song of Hiawatha; and Mary Seacole, the Jamaican nurse, and heroine of the Crimean War. Since 1986, English Heritage has managed the blue plaques scheme. So far, English Heritage has erected nearly 300 plaques, bringing the total number to over 800.

B. English Heritage receives about 100 suggestions for blue plaques each year, almost all of which come from members of the public. The background of each case is very different. Each nominated person has to meet basic selection criteria before they can be considered. Most importantly, they must have been dead for 20 years or have passed the centenary of their birth, whichever is the earlier. This delay allows a person’s reputation to mature and ensures that their fame is long-lasting.

C. English Heritage’s Blue Plaques Panel – representatives of various disciplines from across the country – considers all the suggestions which meet the basic criteria; on average, around 1 in 3 proposals are accepted. If a figure is rejected, proposers must wait a further 10 years before their suggestion can be considered again. Detailed research is carried out into the surviving addresses of shortlisted candidates, using sources such as autobiographies, electoral registers and post office directories.

D. As only one plaque is allowed per person, the house to be commemorated has to be chosen very carefully. Factors which are considered include the length of residence and the accomplishments of a candidate during the relevant years. A significant place of work can also be considered.

E. Before a plaque can be erected, the owners and tenants of the building in question have to give their consent. Where listed buildings are involved, Listed Building Consent is sought from the relevant local authority. If such consents are granted, the plaque is designed, and then produced by a specialist manufacturer. It is normally ready within about two months. Plaques are set into the fabric of the building, flush with the wall face. The cost of plaque manufacture and installation are borne entirely by English Heritage. In all, it can take between 2 and 5 years from the initial suggestion to the erection of a plaque.

F. The exact form of the blue plaque, as we see it now, was a relatively late development, though certain guiding principles had been in place from the outset. The earliest plaques, erected in 1867, were blue. Their format, a circle with the name of the Society of Arts worked into a pattern around the edge, was used consistently by the Society over its 35 years of management.

G. Manufacture of each plaque is undertaken by the mixing and pouring of a thick clay slip into a casting mold. When sufficiently dry, the cast is removed and the outline of the inscription and border is piped onto the face of the plaque and filled with white glaze. Blue glaze is then applied to the background before firing. This process produces gently raised characters and border, a unique feature of English Heritage plaques. After firing, plaques usually have a thickness of 2 inches (50mm) and a final diameter of 19.5 inches (495mm), although smaller diameter plaques are sometimes used to meet special circumstances.
H. Plaques have been found to be extremely durable and have an almost indefinite life expectancy. Similar plaques erected by the Society of Arts have lasted, perfectly legible, for over one hundred years. Due to the slightly domed design, they are self-cleaning and require virtually no maintenance.

Questions 1-6
Reading Passage 1 has eight paragraphs A-H. Which paragraph contains the following information? Write the correct letter, A-H, in boxes 1-6 on your answer sheet.
1. the toughness of the plaques
2. the length of time it takes to produce a plaque
3. the way the Blue Plaques Panel functions
4. the conditions which need to be met in each case
5. the reasons behind selecting a house to be honored
6. how the Blue Plaques scheme first started
Questions 7-10

Complete the diagram below.
Choose NO MORE THAN TWO WORDS AND/OR A NUMBER from the passage for each answer.
A Blue Plaque