Some people believe that air travel should be restricted because it causes serious pollution and uses up the world’s fuel resources. To what extent do you agree or disagree?

At a time when people all over the world worry about the decreasing level of fossil fuels and global warming, it is right to take action to save the planet Earth. However, to simply discourage flights is not the answer. International tourism has become the backbone of many economies of the world. Many countries are earning from tourism. Many people are employed in this industry. Many businesses like hotels and leisure centres are dependent on tourists. So, if we discourage international tourism, it would create new and even worse problems. Many businesses would go broke and many people would be without jobs.

Air flight also enables intercultural exchanges between countries. The advent of cheap air fare makes it possible for people the world over to travel regularly, regardless of the purpose of the trip. Therefore, people have the opportunities to learn from different cultures and have a better understanding of countries they used to be unfamiliar with. This, in turn, enhances cultural communications between countries.

It is true that air travel consumes oil, but other modes of transportation are also causing pollution and using fuel. Discouraging private cars and encouraging people to use public transport could help save the environmental resources in a big way. Therefore it would be a very unpractical decision to restrict air travel at the cost of people’s mobility, or worse, at the cost of the development of the economy. Technology could also be used to produce more environmentally friendly and fuel efficient engines.

Summing up, instead of restricting air travel, we should develop more efficient engine that produces more energy output with less fuel and fewer major air pollutants. We should also focus on limiting private vehicles and encouraging public transport. 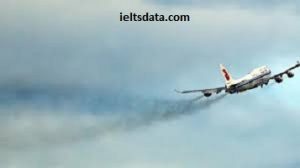 1 thought on “Some people believe that air travel should be restricted because it causes serious pollution and uses up the world’s fuel resources. To what extent do you agree or disagree?”