Differences between countries are barely evident these days. Everyone in the world is wearing the same brands and watching the same TV channels and movies. Do you think it is a positive or a negative development?

The main advantage of this change is that communication is much better nowadays; people understand other cultures much better and have become more open in their outlook of life. This has resulted in more business and cultural contacts among different nations. Multinational companies have opened in many parts of the world providing jobs to thousands of people. There is also more efficient trade between different countries around the globe thereby improving the economies of developing countries. People have more opportunities to travel and therefore have awareness of other cultures.

The major reason why people consider such a situation negative, is that national identities are being lost. We eat the same food, watch the same TV programmes, listen to the same music and wear the same clothes. For instance, the international outlets like Reebok, Nike and Levi’s can be seen everywhere. Food outlets like MacDonald and Starbuck’s etc. can be seen in almost all corners of the world. People wearing the same type of clothes can be seen everywhere. People have also started speaking one language, English, in many parts of the world. In fact, English has become the lingua franca today.

However, I feel that this is a very narrow definition of national identities and nations are as different as they were ever in the past. Cultural identity is based on far more than just the films we watch or the clothes we wear. For example, take my own culture of India and compare it to the west. We may wear any clothes, but we never take the names of elders and call them with respect. In the west, it is quite OK to call anyone by name. In fact, they appreciate it more. I believe that after knowing about other cultures, we learn to respect our culture even more. So, some very deep-rooted national identities will always be there.

To conclude, similarities among people and their lifestyles cannot be denied. However, the similarities we see today are only on the surface. Total loss of national identities can never take place. Therefore, this situation is largely positive. 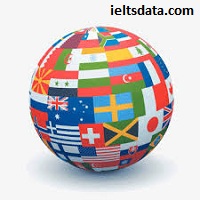 3 thoughts on “Differences between countries are barely evident these days. Everyone in the world is wearing the same brands and watching the same TV channels and movies. Do you think it is a positive or a negative development?”