Some people think we need to give aid to all poor countries. Others, however, argue that we should not give international aid to countries with corruption in their system. Discuss both views and provide your own opinion.

Humanitarian relief is also an instrument to promote peace and security. The deep-rooted hostility between some countries can result from the gap in the standard of living between these countries. When aid is given, it opens up the possibility of cultural, economic and social interaction between countries, and thereby easing tension. Recipient countries can thus participate in the global economy, which is a crucial step in warding off poverty.

Admittedly, monetary aid is sometimes misused or miss-spent, but these cons can never overshadow the benefits. Misuse can be tackled by tight regulations and scrutiny. In general, the abuse of international aid is an isolated event, so its effect should not be overstated.

In conclusion, the role of humanitarian relief is not just to deliver prompt assistance to people in need, but also to strengthen ties between countries. Although fraud and corruption occur every now and then, they can be addressed in strict ways. 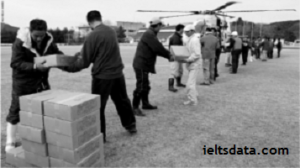