The best way to solve the world’s environmental problem is to increase the price of fuel. To what extent do you agree or disagree with this statement?

To begin with, the number of cars in a country directly depends on the proportion of the population, affluent enough to own cars. As a result, raises in gas price could invoke hard feelings among this segment of people, but would not drastically change their behaviour in using cars. Even if the number of cars on road is reduced due to higher gas cost, this is not the best way to solve traffic problems. Such policy would hurt the auto industry, place higher costs on current and prospective car owners, and be detrimental to the economy of a nation. In the long run, the final way out could be the construction of better roads and more effective use of available public transport facilities.

Secondly, there is evidence that waste gas from cars is not the leading cause of air pollution. The culprit may be the discharge of polluting substances into the atmosphere due to the rapidly growing manufacturing industry. As a result, reduction of the number of cars would not return us a blue sky and fresh air. We could better handle this problem if we could increase control over industrial waste-discharge and adopt more environmental friendly materials and production equipment.

Finally, other measures like the application of cheaper and cleaner energy resources could also be a better solution. For example, we now have the ability to make cell-powered or even solar-powered cars. Such energy is completely clean and plentiful.

Summing up, it is not the best way to control traffic and pollution by increasing gas price because such action will hurt consumers and economy without achieving what it is aimed for. Measures such as construction of better transport facilities and development of new energy resources could be more effective solutions. 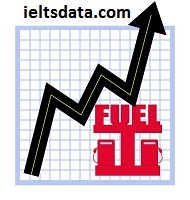 1 thought on “The best way to solve the world’s environmental problem is to increase the price of fuel. To what extent do you agree or disagree with this statement?”