Secondly, it has been seen that if parents are held responsible then it would definitely lead to an improvement in family life. Such parental responsibility would become a cultural norm and families will develop closer bonds. Divorces would become rare and broken families would also become less. Finally, children are also less likely to commit a crime if they know that their parents would be held responsible.

There are those who oppose holding the parents responsible. They say that children today are independent and there are many external influences, which affect the behaviour of children such as TV and peer pressure. However, I firmly believe that if parents take care of their children and monitor their activities and friends circle, the effect of external influences could never be so overpowering that children commit crimes. Parents could be made to pay fine if children commit petty crime and the punishment could also be more severe such as a heavy fine or imprisonment if the child commits serious crime such as murder.

Summing up, if we want to reduce the number of such crimes, we need to make parents take more responsibility. 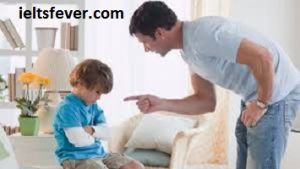