To begin with, industrial growth benefits nearly all citizens of a country, even if not equally, and therefore reduces poverty. For example, in rural areas, most of the poor are engaged in agriculture. When such a country grows through agricultural exports, it benefits both poor farmers and the even poorer labourers they employ. Similarly, rapid growth in manufacturing sector because of increase in demand creates a lot of new jobs, and eventually causes a rise in wages that further reduces poverty.

My second argument comes from historical records. Western countries began discovering the positive relation between economic growth and poverty reduction around 1820 and as a result the living standards in Europe and the United States improved many fold in the next years. Economic growth thus eliminated mass poverty in what is today considered the developed world. Even a short-term view confirms that the recent acceleration of growth in many developing countries has reduced poverty, measured the same way.

The opponents of this view claim that economic progress leads to inequality between the rich and the poor. They opine that a handful of rich are getting richer while the poor are being driven to the wall. However, results have proved that such inequality is only short lived and everyone has benefited in the long run. It is because of the high initial inequality that it appears as if economic growth is leading to poverty.

Summing up, industrial progress definitely reduces poverty. Sometimes, there is unequal distribution of wealth in the initial stages of economic development. Nonetheless, everyone benefits eventually. 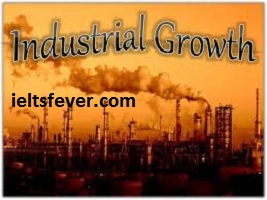