In some countries the number of people using bikes as main transport mode is decreasing, even though it is so beneficial. Why is this so? How can people be encouraged to use more bicycles?

There are many ways to motivate people to use the bike. The onus is on the government to make cycling safer and more inviting. Investment needs to be done in a vast network of cycling paths. For example, in Denmark, there are 19000 km of cycle tracks, as a result of which many people ride bikes. These cycle tracks are clearly marked, have smooth surfaces, separate signs and lights for those on two wheels, and wide enough to allow side-by-side cycling and overtaking. Perhaps, that is why, there are more bicycles than the number of people in Denmark.

Furthermore, people could be made aware of the benefits of cycling. Bicycle is a cheap and green mode of transport. Media, such as the TV, could be used for this purpose. Our celebrities, who act as the role models for many, could be a lot of help. If they start using the bicycle, many youngsters would follow them and do the same. For example, a few months ago, Vidya Balan, India’s famous film star, was seen on TV saying that whenever she has to gift something, she gifts a sapling. Since then, I have started giving a sapling to my friends on their birthdays.

To sum up, there are many reasons why people do not use the bicycle now, but some effective steps could be taken by the governments to promote the use of bicycles. 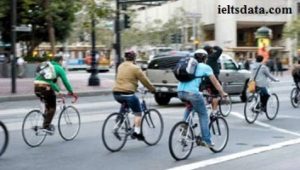 3 thoughts on “In some countries the number of people using bikes as main transport mode is decreasing, even though it is so beneficial. Why is this so? How can people be encouraged to use more bicycles?”