why is it poisonous?

where is it found?

god created the vegetation on earth which is helpful for human beings in different ways. all living creatures get food from this vegetation.but still there are some plants which are poisonous and could be harmful not only for human beings but for all types of other living creatures. today I would like to talk about a poisonous plant which people use for daily use as vegetables but It could be could be poisonous and it is the potato.

Potatoes contain toxic compounds known as glycoalkaloids, of which the most prevalent are solanine and chaconine. Solanine is also found in other members of the Solanaceae plant family, which includes Atropa belladonna (“deadly nightshade”) and Hyoscyamus niger(“henbane”). The concentration of glycoalkaloid in wild potatoes is sufficient to produce toxic effects in humans. The toxin affects the nervous system, causing headaches, diarrhea and intense digestive disturbances, cramps, weakness and confusion, and in severe cases coma and death.

Poisoning from cultivated potatoes occurs very rarely, however, as toxic compounds in the potato plant are generally concentrated in the green portions of the plant and in the fruits, and cultivated varieties contain smaller concentrations than wild plants. Cooking at high temperatures (over 170 °C or 340 °F) also partly destroys the toxin. However, exposure to light, physical damage, and age can increase glycoalkaloid content within the tuber, the highest concentrations occurring just underneath the skin. Tubers that are exposed to light turn green from chlorophyll synthesis, thus giving a visual clue as to areas of the tuber that may have become more toxic; however, this does not provide a definitive guide, as greening and glycoalkaloid accumulation can occur independently of each other.

Q-1 describe a plant in your own words.

Ans: a plant belongs to the vegetation created by God on earth.plants are of different kinds like flower plants, fruit plants. some plants are solely used for the wood purpose. some plants used to make rubber.so it is a God gift to human beings which serves various purposes.

Q-2 how plants are helpful in the betterment of the environment?

Ans: plants are helpful in different ways. first and foremost benefit is that they release oxygen for living beings to survive on earth and absorbs carbon dioxide which is harmful to the human beings. moreover, they are helpful in decreasing soil erosion and increasing fertility of the soil.

Q-3 is there any threat to plant vegetation on earth in this modern era?

Ans: yes there is big threat to plant vegetation on earth in this modern era because due to increase in population more and more houses are needed for the people and it leads to deforestation.people also cut trees for the purpose of agriculture.

Describe an outdoor sport that you haven’t has done yet and would like to do in the future. 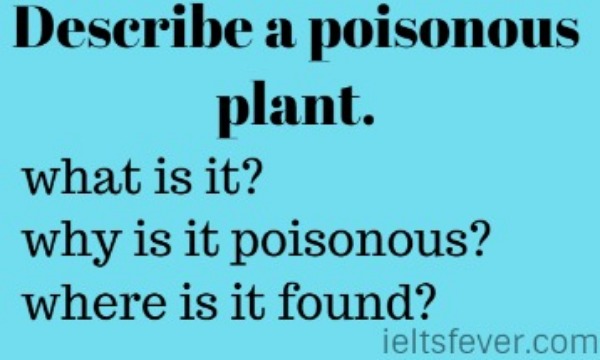 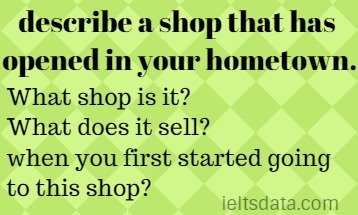 describe a shop that has opened in your hometown. What … 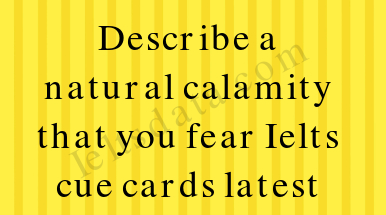 Describe a natural calamity that you fear Ielts cue cards …