Describe a special date in my country’s History.

Although I belong to India and my nation has got a diverse culture and really very much rich historical background. Even though in my country, people really celebrate the tradition, culture religious and historical events with great enthusiasm. Though but the special historical day that the people really remember in my country is the 15th of August, 1947 independence day.

Hence the Republic of India gains the Independence from the rule of British government after 2 years. Certainly, on that day the first Prime Minister of India Mr. Nehru raise the Indian National Flag on the Red Fort in Delhi and hence he convey the speech of happiness to millions of civilians of India over time.

Luckily by telling them their valuable rights in their own nation along with the upcoming facilities as well. Apparently, from that time till now, the culture of waving the flag in public places in my country is still alive and happening.

Basically, people like to celebrate this event or a day in the police headquarters and federal offices and in the educational sectors as well.

Lovingly in this ceremony, the students generally perform the independence songs, speeches, braids and cultural dance in front of the government offices and ministers. And the ministers usually wave the flag of the nation in front of my country’s civilians along with motivational speeches as well.

More likely this historical date is very much special for me because my grandfather participates in this freedom fight and lost his life.

Eventually I always eagerly wait for this day because there is  a huge ground of outdoor stadium in my city where more than thousands of people gather over there to watch the event of independence organized by the government and I always indulge over there along with my family members because they usually announce my great grandfather name over there in the freedom ceremonies.

Gratefully I always salute the freedom fighter of my nation because we are living our life very much happy in our nation because of them. It is one of the important dates in my country’s history. 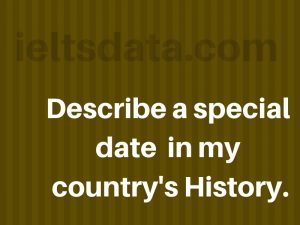