When did it happen?

Where did it happen?

Who were you with?

nowadays, the cell phone becomes an important part of everyone’s life. One cannot think without a cellphone.Mobile is used for various purposes like to pay bills, for shopping, to search locations, social communication, and entertainment.

It was the time when I was going to fill the form for my master’s degree Degree. It was the last day to fill the course fees. But, unfortunately, I become late to fill the fees because first I have to post the documents through post office but there was a rush of people there. But finally I posted the documents but at that day the banks were closed on a half day, it was Saturday. When I reached the bank, the counter had been closed.

I felt very sad and helpless then I called my friend Tejinder Singh and He told me that now a new facility of online banking is available on the cell phone from where we can easily pay the fees to the distant place.I reached on the play store on my phone and install the transaction app. I was surprised that within 5 minutes, I paid the fees. I also received the confirmation message and email that your fee has been successfully paid. I felt really happy at that time. Now, I pay most of the bills online.A cell phone is really a useful gadget.

Q-1: do most people have mobile phones in your country?

Ans: yes people of all ages whether they are adolescents, young, old.it became an important part of their life.I belong to Punjab state of India and Punjab is on the top list of users having mobile phones

Q-2: What do people use cell phones for?

Ans: people use cell phones for various purposes.they used cell phones for talking to each other.people of all ages use mobile phones to use various social apps like Facebook, WhatsApp, Viber, IMO etc.they keep in touch with others through these apps.

Q-3: What are the advantages of having a mobile phone?

Ans: there are a number of advantages of using a mobile phone.in the past time, one has to travel the long distance to send messages but with the advent of mobile, it is very easy nowadays.people also make new friends and keep them in touch with their old friends.

Environmental pollution is a serious issue and it is important to take steps on an individual level to reduce it. But now, since it is becoming an international issue, it is time to take environmental protection to a higher level. To what extent do you agree or disagree?IELTS result 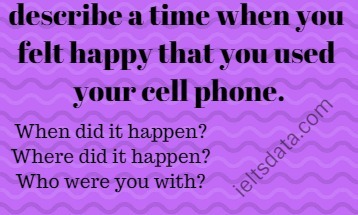