What would it be?

food is one of the three basic necessities of a person in life-food, shelter and clothing.among them food is the most important because to survive in society one must need food.whether I belong to Punjab in India and I like the dishes prepared here.but I would like to talk about a food which I want to eat when I would visit America, where my brother is residing. I would go there on summer vacations and I would spend my holiday for one month.I tasted various kinds of food but the food which I  would like to eat is the doughnut.

in summer vacations there will be National Doughnut Day, also known as National Donut Day, celebrated in the United States of America, is on the first Friday of June each year, succeeding the Doughnut Day event created by The Salvation Army in 1938 to honour those of their members who served doughnuts to soldiers during World War 1.

I would go to the doughnuts shop with my brother and his family and I would enjoy this delicious food there.Doughnuts are usually deep-fried from a flour dough, and typically either ring-shaped or a number of shapes without a hole, and often filled, but can also be ball-shaped. Other types of batters can also be used, and various toppings and flavourings are used for different types, such as sugar, chocolate, or maple glazing. Doughnuts may also include water, eggs, milk, sugar, oil, shortening, and natural or artificial flavours.

The two most common types are the ring doughnut and the filled doughnut, which is injected with fruit, preserves, cream, custard, or other sweet fillings. Other shapes include rings, balls, flattened spheres, twists, and other forms. Doughnut varieties are also divided into the cake and yeast-risen type doughnuts. Doughnuts are often accompanied by coffee purchased at doughnut shops or fast food restaurants, but I would enjoy it with milk.

Q-1: what kind of food do you like-home made or fast food?

Ans: I like to eat fast food on certain occasion but in reality, I like homemade food.the reason behind this is that homemade food is hygienic and nutritious.it is good for health because it is less in fat and high in proteins.

Q-2: what is the major cause of obesity among children and youth of today?

Q-3: what is the importance of food in the life of a person?

Ans: food has huge importance in the life of every person.infact it is one of the three basic necessities of a person in the society.without a person cannot survive and succeed in his life.

Some people believe that teaching children at home is best for a child’s development, while others think that it is important for children to go to school. Discuss the advantages of both methods and give your own opinion.

Many people believe that healthy eating and the importance of healthy food should be taught in schools. Others say that parents should teach their kids about healthy food and diet. Discuss both views, give your opinion and relevant examples 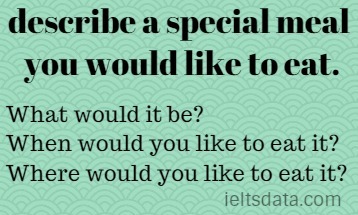