Many people nowadays do not feel safe either when they are at home or go out. What are the reasons and what can be done to solve this problem?

There is no doubt that an increasing number of people feel unsafe, not only when they go out somewhere, but also There is no doubt that an increasing number of people feel unsafe, not only when they go out somewhere, but also when they are at home. There are several factors, which have lead to this increasing fear. In this essay, I will look into the causes of this and suggest some solutions. The reasons why people are afraid of going out of their homes are very obvious. The crimes committed on the streets, are on a rise. The road mishaps have risen to a proportion, more than ever before and continue to increase everyday. Some people are afraid to go out because of the fear of natural calamities and also, sometimes due to health related disorders, which might be caused due to the increase in pollution. The reports of bombings and terror attacks have become everyday news. As a result, people feel afraid of stepping out of their homes. At the same time, people are also becoming increasingly scared within their homes. The main reason for this is the escalation in the crimes being committed at homes, like murders, robberies, etc. In a recent news article, it has been surveyed that there have been more crimes committed by domestic help at people’s homes, than the crimes being committed on the streets. This has led to people feeling vulnerable, at home and when they are out on the streets. There are certain steps, which can be taken, by the government and individuals, to make people more safe and protected. The increasing unemployment is the main reason of these crimes. If the youth of a country are provided vocational training and good job opportunities, they would not fall on the path of crime. Another important measure, which needs to be taken by the government, is to employ more security measures, like cameras, more police patrolling, and more security in public transport and public areas. This needs to be done in the residential and commercial areas, both, so that it deters the criminals and instills a sense of security in the public. For instance, in Bengaluru, government has now made it compulsory for all showrooms and shops to install security cameras. There are also random checks made by the government officials to ensure that the security standards are met in all commercial areas. To add to it, stricter punishments for the offenders will act as a major deterrent for the criminals. This will greatly reduce the incidents of crimes on the streets and at home. Another important measure is the use of technology in the security systems installed at homes. People can install advanced alarm systems and security cameras in their homes, to avoid any unwanted incidents of crime. This also helps greatly in the reduction of domestic crimes. To sum it up, people’s fear and insecurity is justified, with the increasing reports of crime reported by the media. However, this situation can be mitigated by taking some measures, like tackling the unemployment problem, tightened security measures, stricter punishments and the use of advanced technology in households and commercial areas. 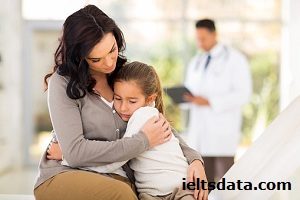 young woman and her sick daughter waiting in doctor’s room