Percentage of UK people who consumed the daily recommended amount of fruit and vegetable in 2002, 2006, and 2010. 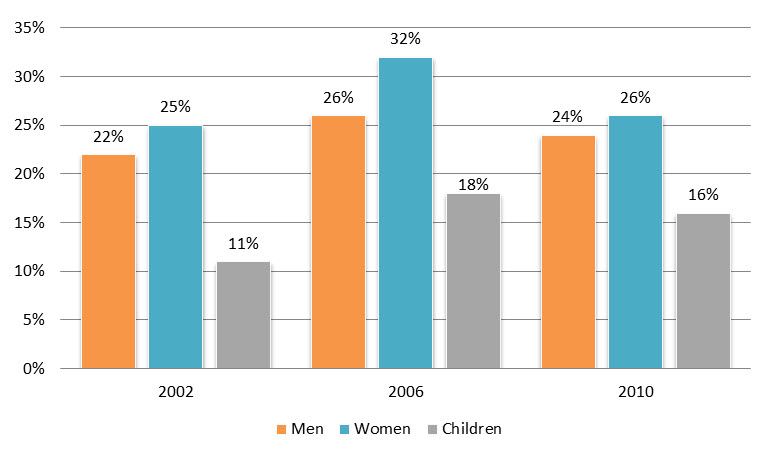 Summarize the information by selecting and reporting the main features and make comparisons where relevant.

You should write at least 150 words.

The given bar graph depicts the information about the number of fruits and vegetables suggested being consumed by the English masses
It can be clearly seen that in 2002 the utilization of fruits and vegetables by the males of the united kingdom is double as compared to consumption by children that was 22%. As well as consumption by females was recorded as 25% which was 3% more than males.
Furthermore,  it is evident that the usage of fruits and vegetables by the young ones, men and women was 18%, 26%, and 32 % respectively in 2006. Moving further, in 2010 it was noticed that a negligible difference of 2% was seen in the consumption of males and females that the former was recorded as 24% and the latter was 26%.

Overall, it can be concluded that the maximum consumption of fruits and vegetables was by women and the minimum was by children.

the rendered bar graph illustrates the information about the proportion of  United kingdom individuals who took everyday recommended quantity of vegetables and fruits in three years (2002, 2006, 2010).
Overview, it is observed that the consumption of fruit and vegetables by women was highest in the given years while children consumed the least amount.
To begin with,  it is crystal clear that in 2002, 22 % of men took fruits and vegetables while 3 % more of this amount was consumed by women. Only 11% of kids ingest wares and greens. After 4 years, the intake of these things inclines and the values were 26%, 32%, and 18% by men, women, and children respectively.
Delving deeper into the given illustration, In 2010, the ingestion by men declined by 2% however,  a sharp decline was observed in the percentage of females who eat fruits and veggies accounted as 26%. Children remained the least intake of fruits and vegetables that was figured as 16%.

This is the end of  academic writing task 1:: (Percentage of UK people who consumed the daily recommended amount of fruit and vegetable in 2002, 2006, and 2010.)