Talk about a magazine you read.

What type of people read it?

Is it popular in your country?

there are a number of magazines in India which are published weekly and monthly.they are published in various languages.they are an important source of knowledge for students, teachers, and people.ias aspirants prefer to read these magazines for general knowledge and current affairs. today I would like to talk about my favorite magazine which is India today.i am reading this magazine since 2003 when I was doing my graduation from dm college, Moga.

this magazine is very popular in my country because of its update knowledge and current affairs.people of all ages love to read it because it has all kinds of news like sports, politics, social events, health, local news, national events and international affairs. mostly youngsters who are preparing for civil services exams prefer to read this magazine because it fulfills all the needs of pcs aspirants.it is also famous among girls and young women because many types of beauty tips are published in this magazine.so this magazine is popular in my country.

Q-1 What’s the main difference between newspaper and magazine?

Q-2 What kinds of books/newspapers/magazines do adolescents read in your country?

Q-3 With the popularity of the Internet, do you think newspapers and magazines will disappear?

Ans: it is true that in this modern era people are crazy about the internet and they keep themselves busy on various social websites like facebook, Whatsapp, Skype, Viber, Instagram, twitter etc.but it doesn’t mean that with the popularity of internet newspapers and magazines will not disappear. newspapers and magazines have their own place, importance, and benefits for the people.

Some people think that the government should establish free libraries in each town. Others believe that it is a waste of money since people can access the Internet at home to obtain information. Discuss both sides and give your own opinion. 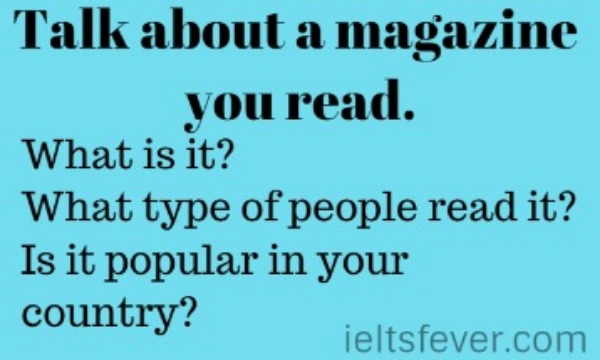