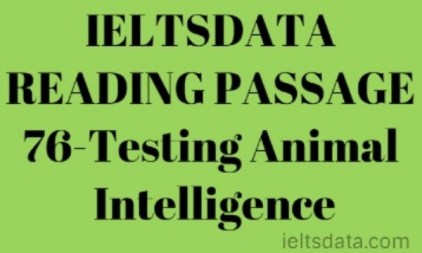 Applying human intelligence tests to animals has been largely discredited, as these are designed to measure human intelligence. Even time-honored tests like putting rats into mazes can be deceptive since such tests assume the animals will rely on the same senses as we do. A rat’s primary sense organ is its nose, not its eyes. Give a rat a maze of smells, not just visible walls, and it can solve it as fast as a human can.

If intelligence is defined as the ability to cope with everything your environment throws at you, then all surviving species are intelligent. If members of any animal species are required to solve complex problems, many of them will eventually do it.
This implies that animals can be “educated” like people. What seems to differentiate humans is not our mental skills so much as our flexibility and our capability for abstract thought: the ability to create new ideas and images as well as receive them.
Animals can do things like navigating or remembering the locations of objects much better than we can. What they don’t do so well is apply reasoning to a whole range of problems, which is one of the things that has made human beings so successful as a species.
Part of the problem in assessing animal intelligence is communication. For example, we can’t speak to dolphins, because they can’t hear human speech very well. And their own language is so different from ours that it will take years of research and enormous computing power to decipher it. So far, scientists have only identified the names, or ‘call-signs’, by which dolphins seem to refer to themselves and each other, including ‘talking about’ other dolphins who aren’t present.

The best we can do is to develop a common language of signs. The Dolphin Institute in Hawaii uses more than 100 different hand-signals. Its dolphins can understand not only individual words but also the grammar which links them – the difference between ‘take the ball to the surfboard’ and ‘take the surfboard to the ball’, for example – as well as abstract concepts like left and right, yes and no, and questions. If you give them a meaningless command, such as ‘take the ball to the surfboard’ when there is no surfboard, they take it to a sign meaning ‘no’, as if to say ‘I can’t’.

Dolphins seem able to learn independently. For example, they are the only species besides humans which can instantly understand television. They realize it’s only a representation of the real world and that they can take instructions from a picture of a trainer on- screen but they can’t expect the picture to give them a reward.

The Dolphin Institute has even devised a signal meaning “be creative”, at which the dolphin will make up some previously unseen behavior. Combine the signals for “create” and “with another dolphin” and two dolphins can produce an instant synchronized routine. This suggests that they can communicate with one another and either design the routine together or agree that one will be the leader.

In the wild, dolphins cooperate to catch fish by driving them onto a beach, and this behavior is not restricted to their own species. In Argentina, dolphins collaborate with fishermen to drive fish into the latter’s nets, in return for a share of the catch. Each dolphin will only work with a particular fisherman and, when they breed, their offspring work with the same man.

As more research is done, we can increasingly appreciate the complexities of other species’ behavior. Monkeys and apes seldom resort to violence to get their own way, preferring social manipulation and deception. The most successful members of the group tend to be those who are best at soliciting support, or who have the largest families to back up their opinions – not the biggest or strongest as with, say, rutting stags. Research has shown that chimps can perform surprisingly complex sequences of actions to process food, such as collecting a bundle of leaves or cracking nuts with a rock. This implies the ability to plan things in their minds before starting the task, otherwise, they might get muddled forgetting to place all the leaves the same way round, or find a hard, level resting place for the nut, for instance.

Even sheep, a byword for mindless behavior, perhaps deserve reappraisal. It has long been known that you can’t buy a hill farm without buying the sheep that go with it. The local flock develops an intimate knowledge of the terrain, enabling the sheep to find food in summer and shelter in winter, which is passed down from ewe to lamb for generations. It was discovered that sheep recognize each other’s faces, and appear to use the right side of the brain for this, just like people. They can easily distinguish between 50 different faces, which they can remember for at least two years, and can remember the faces of sheep they haven’t seen for a while. It is widely assumed that dogs are brighter than sheep. However, in the hills of Gujarat in western India, instead of using sheepdogs to round up their flocks, shepherds call directly to the sheep – and they obey.
Questions 1-5
Complete the table below using information from the text.
ANIMAL
rats

SKILL
1………………
2………………
3………………
4………………
5………………
Questions 6-13
Do the following statements reflect the claims of the writer? Write
YES if the statement reflects the claims of the writer
NO, if the statement contradicts the claims of the writer
NOT GIVEN if it is impossible to say what the writer thinks about this
6. Human intelligence tests are inappropriate for animals.
7. In some cases, animal abilities can be considered superior to human abilities.
8. Animals learn to recognize images more slowly than humans.
9. Human intelligence is more versatile than animal intelligence.
10. Scientists have learned to communicate effectively with dolphins.
11. Dolphins can tell the difference between fact and fiction.
12. Only humans are ever dishonest with each other.
13. We will have a much greater understanding of animal intelligence in the future.
Question 14
From the list below, choose the sentence A-D which best summarises the views of the writer.

Write the correct letter, A, B, C or D, in box 27 on your answer sheet.
A. Scientists are discovering that many animals are much more intelligent than they realized.
B. Some animals are not actually less intelligent than humans – their intelligences are just different.
C. We cannot accurately assess animal intelligence, because their intelligence is different to ours.
D. The only real difference between human and animal intelligence is that we can think creatively.
A. can collaborate with each other
B. can give instructions to other animals
C. transfer knowledge to their offspring
D. can recognize many different human faces
E. use many of the same strategies as humans in their dealings with each other.
F. solve problems in their daily lives
G. can create images
H. can solve certain puzzles very quickly