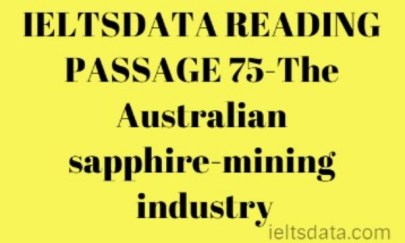 Questions 1-4
Reading Passage has five sections, A-E. Choose the most suitable heading for sections B-E from the list of headings below.
List of Headings
i. Marketing gemstones
ii. Present day mining
iii. Early mining techniques
iv. The future of the Australian industry
v. Introduction
vi. Australia’s domestic sapphire trade
vii. Part of the global sapphire industry
viii. The mass-market jewelry industry
Example Answer
Section A v
14. Section B
15. Section C
16. Section D
17. Section E
The Australian sapphire-mining industry
A
Sapphires are traditionally thought of as blue. However, they actually come in a wide variety of colors. Another misconception is that sapphires are more common than diamonds. Although the laws of supply and demand ensure a higher price for diamonds, sapphires are in fact four times rarer.The mineral name is corundum. (Rubies are the same mineral but in a red form). The color variations in sapphires are caused by traces of mineral impurities within the corundum.
The sapphire is the traditional birthstone for September. It is also associated with 45th wedding anniversaries. The principal use of sapphires is of course in jewelry. Sapphires are very durable – only slightly less hard than diamonds – which make them ideal for jewelry which is designed to be worn on a daily basis. Especially popular are rings which combine sapphires with diamonds, often with stunning effects.
B
Sapphires occur principally in the alluvial gravels found in streams and underground drainage networks. In the early days of the industry, sapphire mining was largely done using manual techniques and simple hand tools. Surface or shallow deposits were raked by hand, and potentially sapphire-bearing material was picked out manually and sieved at the point of collection to separate out any gems.
Hand mining techniques were also used underground. Material excavated from mine shafts was loaded into buckets and raised to the surface with hoisting equipment.
Testing for deposits was done by sinking exploratory shafts. This was erratic, and had a low success rate, with sapphire deposits often being missed because of the limitations of the testing process.
C
In underground mining, modern hand-mining techniques are surprisingly similar to the methods used by the early miners. Naturally, though, nowadays these are supplemented by an array of mechanical methods involving powered machinery. In particular, the washing and separation of mined material are now almost entirely mechanized. In Australia, however, in order to preserve the quality of subterranean sapphire-bearing environments, the use of machinery is in many cases limited under state mining laws. The use of mechanical diggers and tunneling machines is not generally permitted, for example.Australian open-cut mining operations are not subject to the limitations described above. They tend to employ heavy earth-moving machinery to remove layers of topsoil in order to access the gem-bearing gravel layer below.
D
Sapphire mining operations in Australia began in the late 19th century, and Australia has become a major producer of gem-quality sapphires, supplying markets throughout the world.
Today, the bulk of commercially-mined sapphires from Australia are sent to Thailand and Sri Lanka for treatment and cutting. Attempts to relocate processing back to Australia have met with only limited success, due largely to the lower labor costs and a wider range of established facilities in the countries traditionally associated with gemstone processing.
Smaller stones are cut into calibrated sizes to supply the mass-market jewelry industry. The finest quality sapphires and unusual stones mostly find their way to niche markets in Europe and the United States.
E
In the late 1980s, Australia produced around 70% by volume of the world’s sapphires. Production has decreased considerably since then, but international demand for Australian sapphires remains relatively high. Although further production can be expected from existing fields, continued exploration and testing will be necessary if Australia is to continue to meet present levels of international demand into the long-term future.
Another factor which may influence the long-term prospects of the industry are rising production costs. In recent years miners in Australia have become responsible for addressing the environmental effects of mining operations, and have been liable for costs incurred in rehabilitating land environmentally degraded by their activities. This has rendered the industry vulnerable to competition from other sapphire producing countries where environmental regulations are less stringent. To offset this, the Australian sapphire mining industry must look to marketing strategies and value-adding techniques to ensure that the industry continues to be economically viable.
Questions 5-9
Do the following statements agree with the information given in the passage? Write
TRUE if the statement agrees with the information
FALSE if the statement contradicts the information
NOT GIVEN if the information is not given
5. Sapphires are rarer and often more expensive than diamonds.
6. Sapphires and rubies are composed of the same substance.
7. Sapphires are mostly found in or near water.
8. Sapphires are probably the most difficult gem to mine.
9. Most of the best Australian sapphires are made into jewelry for sale in Australia.
Questions 10-15
Based on the information in the passage, classify the following statements.
A. Describes the Australian sapphire mining industry in the past only.
B. Describes the Australian sapphire mining industry in the present only.
C. Describes the Australian sapphire mining industry in the past and present.
D. Does not describe the Australian sapphire mining industry, past or present.
Write the correct letter, A, B, C or D, in boxes 10-15on your answer sheet.
10. Sapphires collected by simple manual methods.
11. Production of more than two-thirds of the world’s sapphires.
12. Underground mining mostly is done with heavy machinery.
13. Cutting off the stones mostly done overseas.
14. Known fields nearly exhausted.
15. Financial disaster very near.