Most of the people in hometown indulge in their leisure time activities in the sports center, grounds, stadiums, and gymnasiums as well.

Though one of my favorite place among all of them is a newly constructed huge park in the north-east direction in my hometown known as Albert Park that is constructed by the Mayer of my hometown last year. Hence when that park was integrated, I went over there along with my family and friends. There was a great rose festival over there. At that time, we were very much flattered and astonished by watching the quality of the park.

Certainly that I usually love to go over there along with friends in the early morning and sometimes in the evenings as well, because it usually takes me 20 minutes by walk and 10 minutes by bicycle. Lovingly that park is really a god-gift to us by Municipal corporation because there is a long concrete path to walk over there and on both sides of the park, there are assorted beautiful flowers.

Gradually on the entrance of the park, the great thing they made is huge parking that is mostly covered with the CCTV surveillance. Apparently, there are numerous ponds over there where ducks and swans usually swim and we feel them brown bread usually and in the evenings, the garden authorities usually play the dancing fountains and people love to watch it over there by having the cup of coffees from the refreshment area on the wooden benches. Gradually on the side of the park, there is a Yoga and meditation center. and on the other side of the park, There are numerous slides and swings for the kids.

Probably around five gardeners look after the maintenance of lawn, grass, plants, and flowers over there.

luckily there is a huge botanical garden section where there is a description of plants written on the bottom and the visitors usually show their kids about the plants and they learn numerous things from there.

Eventually, by my perspective, that park is the phenomenal park in my hometown because of those facilities and people from all around the state love to go over there for relaxation.

Gratefully peop[le really love to go over there to keep them healthy and up to date. The wonderful park which has been developed in my hometown for the welfare of the people. A public facility that improves or influences the local life quality. 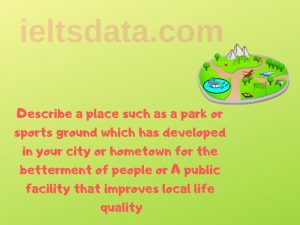