When did you help?

Where did you help?

How did you help?

How did you feel about it?

there are a number of occasions came in my life when I got an opportunity to meet the strangers and it gave me chance to help someone who really needs it. I have helped many persons at different times and in different situations, but today I would like to talk about a situation when I was travelling from Delhi to Canada via Singapore by boarding the air flight of Cathay Pacific.

I was going back to Canada from India after spending two months with my parents who are residing there. By chance, the seat next to me occupied by an old person who was also coming from India. because he also belongs to Punjab, so I started the conversation with him, he told me about the purpose of his visit. we talked for long hours and when he told me that he belonged to the district Moga like me and I feel affection towards him.

he has a problem to converse with the air hostess when the cabin crew staff was serving the eatables because he did not speak well in English. so, I helped him as a translator between him and staff. it makes ease for him. After a long journey, the flight landed at the international airport Toronto. furthermore, I also helped him at the immigration counter and at the baggage claim counter. he was near about 65 years old and was unable to carry his luggage so, I arranged a trolly for him. I helped him to fill the custom and immigration forms.

when we came out of the airport his family came to receive him . he introduced me to them and all thanked me. we also exchanged our phone numbers and I felt very calm and satisfied after helping an old and needy person.

Q-1: from whom you learnT this good thing to help old and needy persons?

Ans: I learnt this thing from my grandparents.they always advised me to help the needy persons because they said that if you would help someone then god will help you.now both of my grandparents have no more in this world.so I always saw them in other old persons and they seem to me, my own grandparents.

Q-2: why most people nowadays are forgetting to respect their elders?

Ans: in this modern era people are forgetting to respect their elders because they became so busy in earning money and fulfilling their desires that they do not have time to spend with their elders.they forgot that only their parents made them capable to earn money by giving them good education and care since their birth.

Q-3: what role the elders could play in your life?

Ans: elders could play an important role in our life because they have seen many ups and downs in their life and have a vast experience of everything.they could give us important suggestions and lead us from the front.

In many countries crime is increasing. What are the main reasons for this? What can be done to improve the situation? Support your position with relevant examples and include your own experience. IELTS result 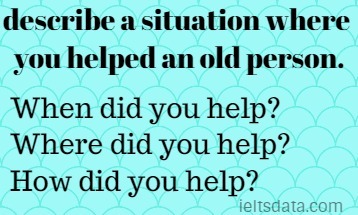