Who were you talking to?

What you talked about?

Why did you find this conversation interesting?

in today’s life, I met many people in the society who did not know to me and sometimes I have small conversations with them and it gives me a chance to learn new things and experiences from experienced persons.conversation is a source of vast knowledge if it is meaningful.today I would like to talk about one conversation which I have with a person when I was going to Manila where my brother is residing.i started my journey from Moga to Delhi in the Indo Canadian bus.when I reached Ludhiana a tall person, looked like a gentleman, boarded the bus and he sat on the seat beside me.

when the bus started its journey from Ludhiana to New Delhi he asked me that where I was going.I told him that I am going to Manila to spend my vacations where my brother is living with his family.then he told about himself that he is residing in the USA with his daughter and wife.he told me that he was in the police department on the post of DSP, but he resigned from his post and settled in the USA.i told him that my father was also in the police department and retired from it a few years ago.

then I asked him the reason why he has resigned from his higher post earlier to his retirement.he told me that it is because of interference of politicians in the working of the police department.I had heard about it a little bit about this from my father but I want to know in detail.then he told me his whole history that how one politician of his area forced him to do some illegal work and when he declined his order, he transferred me to a distant area and he threatened me also that he would indulge me in some false case.he told me that he was shocked at that time and after thinking for some days I decided to resign from my post.i was completely shocked after hearing his story and my doubt that why sometimes officers on higher posts sometimes resigned and sometimes commit suicide.we lost in our conversation so deep that we did not know when we reached the airport.after that, we said goodbye to each other and I felt sympathized with that unknown person.

Q-1: what is the benefit of having a conversation with elder and unknown persons?

Q-2: would it be helpful in your education to converse with strangers?

Ans: yes, definitely it would be helpful in your education if you converse with strangers.it would give you a chance to gain knowledge about their cultures.it adds to your general knowledge.it also enhance your communication skills.

Q-3: what are the available sources to keep in touch with strangers? 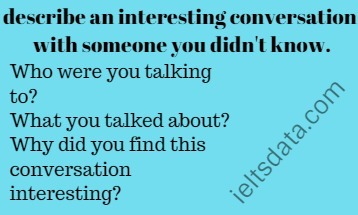