The number of TV programs are growing day by day. Some people say that it is good as it gives people more choices, while others say it affects the quality of TV programs. Discuss both and give your opinion.

On the one hand, people have a lot of choices because of too many TV programs. For example, if we look at the number of daily soaps, there are quite a few running on many different channels and people can select any one or two according to their taste. Even the reality shows related to music, dance, adventure and many other things are also far too many and people watch whichever they can relate to or whichever they are interested in.

Secondly, some reality shows have given an opportunity to the common man with talent to come forward and show his talent to the world. For instance, in recent years, singing contest programs such as ‘Sa-Re-Ga-Ma-Pa’ and Indian Idol have uncovered many talented singers. This, is definitely a good practice for the Indian TV.

On the other hand, it is indubitable that there are too many such talent shows on television, which are similar in concept as well as content. Fierce competition between satellite channels for audience ratings has led to a large number of copycat programs. The excessive production of such programs that are quite similar to each other is a huge waste of resources and a waste of audience time. To exemplify, since the overwhelming success of Sony TV’s ‘Indian Idol’ in 2005, talent shows have hit major TV stations across India. These programs have attracted a large number of viewers. However, at the same time, the similarity of such shows has made TV quite inanimate. Vitality of the cultural industry comes from originality and creativity. Program producers must realize that people need a richer and varied choice.

Furthermore, too many programs have resulted in choice overload. It is virtually impossible to keep up with everything that’s worth watching, and at some point, viewers need to decide what they have to watch and what they can ignore. Even the popular programs may not always be on top, and they might gradually become paltering while quality declines.

To sum up, even though there are choices because of an abundance of TV programs, an excess of TV programs is definitely not good. We need fewer, quality programs, which make our leisure time worthwhile. 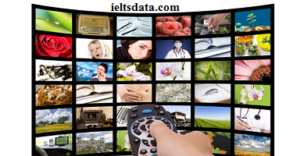