My first argument against financial aid is that this aid may not actually reach those for whom it is meant. It may go into corrupt pockets. Secondly, it would make those people lazy, as they would be getting aid without doing any work. Thirdly, the aid may be used for wrong purposes. For example, the aid may be given for development projects but it may be used to promote terrorism. Finally, if aid is given without proper research, then it may be used for projects, which are not the priority of the people. For instance, the people may need health and educational institutes, whereas the aid may be used for making dams or expanding roadways.

If rich countries open factories and multinational companies in poor countries it would be a win-win situation for both, as the poor would get employment and the rich would have to pay much lesser to these workers than they would have to pay their counterparts in their own country. So, more and more rich countries would step forward to help the poor. Direct financial aid would not bring such a situation.

Summing up, financial aid is not the best way to help poor countries. From my own perspective, the developed countries ought to assist the impoverished countries through other approaches. 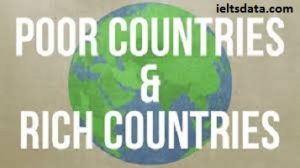