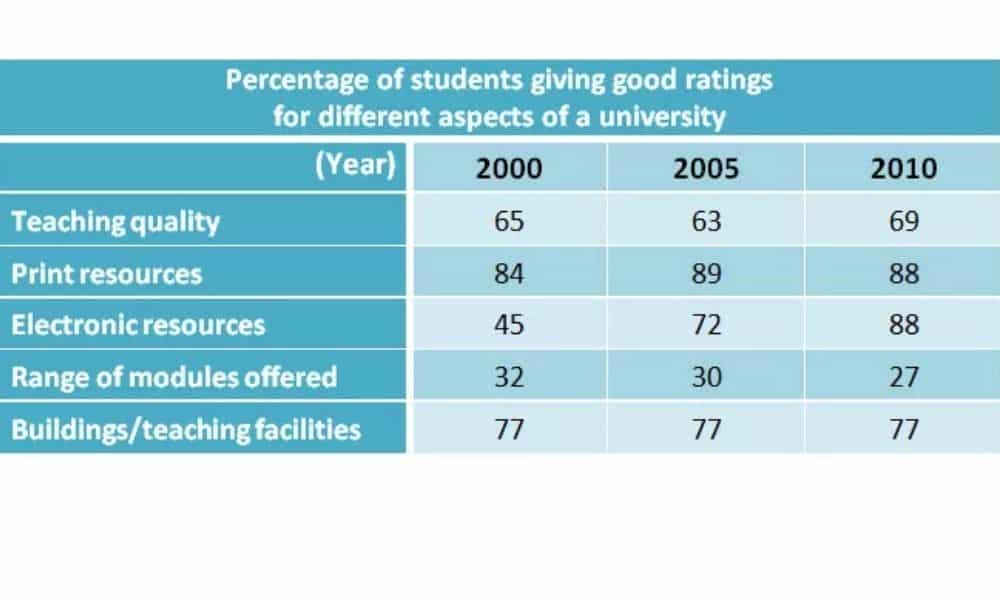 The table provides information about student’s satisfaction with the quality of teaching and learning support of a university in the years 2000,2000 and 2005 respectively. The survey focuses on the 5 main features, namely on teaching quality, print resources, electronic resources, range of modules offered, and building or teaching facilities.               (IELTSData Twitter)
Overall, there is a slight rise in teaching quality and print resources, while electronic resources received the greatest positive feedback.
In the year 2000, 65% of students rated satisfied with teaching quality, with a gentle fall of 2 % in 2005, the general performance has rinsed up to 69% in 10 years. A spontaneous fluctuation has been observed on print resources as well. A slight rise of 5 % good ratings from 2000 (84%) to 2005 (89%) was noticed, however, followed by a 1 % drop in 2010 roundup the trend.
On the other hand, it is seen that a drastic boost in electronics resources won over four other aspects in students’ eyes. A total of 43% of increment has been rocketed across the said period, which is nearly double. Conversely, the range of modules offered recorded the lowest at 27% in 2010, when compared to 32% back in 2000. Meanwhile, building and teaching facilitating remains stable, scores 77% steadily yearly very promisingly.