Describe a tall building in your hometown you like or dislike

– What it is used for

 I belong to Ganganager, and there are no tall buildings in my hometown.

 Here I would like to talk about the Qutub Minar, which is in the Mehrauli area of Delhi.

 It is used as a tourist attraction nowadays.

 The building is tapering towards the top.

 It is the tallest brick minaret in the world.

 Inside the tower there is a circular staircase with 379 steps leading to the top.

 I visited the Qutub Minar when I was in 10th.

 I really disliked the fact that we could only see the Qutub Minar from outside.

some accident in 1981 in which 45 people including children were killed.

 Our school organized a tour to Delhi.

 We were 40 students and 4 teachers.

 It was a five-day tour.

 We visited many places in and around Delhi.

 We did boating at the India Gate.

 There was an International trade fair going on.

 Our teachers took us there also.

 We enjoyed a lot. 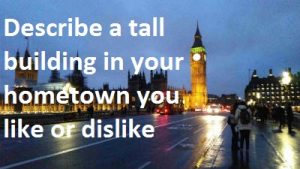