which is the company?

where is it situated?

what kinds of people do job there?

which products does it make?

I belong to the Moga district of punjab.it is a town situated on the grand trunk road from Ferozepur to Delhi.there are a number of companies here but the company which is the most famous and large among them is Nestle India Limited.it is situated in the heart of the city at Moga to Ferozepur road.it occupied an area of about 20 acres.it is situated exactly opposite the sectriate of Moga city.

It gave employment to a large number of people.it is established with the joined efforts of Indian and Swiss governments.both the nations have half the share in it.people of both the countries worked here.people are appointed on different posts according to their qualifications and abilities.people came to work here from distant areas of the state.this company is famous not only in India but all over the world also. officials take the test of the candidates applying for the job in the company and based on the result they appointed the candidates on various posts.

it makes various kinds of products like coffee, ghee, milk powder, chocolate, candies, Maggi noodles, curd etc.these products are prepared on a large basis.the company imports these products not only in India but to all parts of the world also.there are a large number of trucks who collect milk from various villages of the Punjab state.this milk is then pasteurized in the company and then packed in packets of 500 gms.this milk is delivered cold to various shops in my city Moga from where a large number of customers purchase it.it is very tasty to drink.nescafe is the coffee made by Nestle India limited and it is number one brand of coffee in India.

Q-1: are there any other companies in your city?

Ans: yes there are many other companies in my city but they are not as large as Nestle India limited.there are companies of rubber tyres, rice, wheat flour, hot spices etc.large number of people are worked there.

Q-2: to what extent is it necessary to establish new companies in your country?

Q-3: how could the government encourage the businessmen to establish new industries in the country?

Holding International games such as the Olympic Games is an exciting event. Some people think it has positive effects while others argue it is a waste of money. Discuss both sides and give your own opinion.

Public transportation could be made free of charge. Are there more advantages or disadvantages to this change?IELTS result 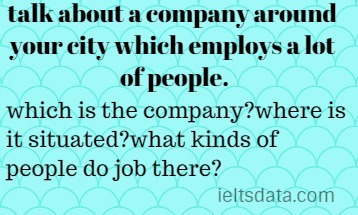