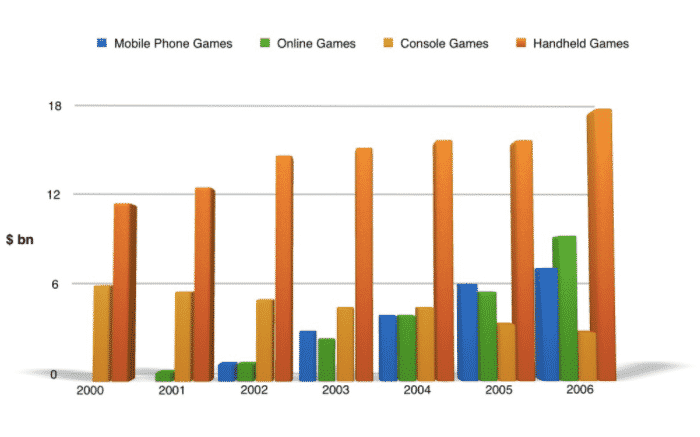 The rendered vertical bar graph expounds the information regarding the universal sale of distinct kind of electronic units namely, cell phone games, online games, console games and, lastly, handheld games, across six years from
2000 to 2006.
Overall, the most outstanding feature is that handheld games had had the first position in universal sale throughout the given tenure. As is presented in the bar graph, initial year, console games and handheld game’s sale were eminent among the whole globe, 6 billion dollar and 10 billion dollars respectively.

In the subsequent years, sale of console games fell down around ($3bn), sale of handheld games were reached at the zenith point ($18bn), however, at the end of the year. Interestingly, the sale of mobile phone games and online games were zero, in 2000. Online games started earning in 2001, whereas, the mobile games initiated their sale in 2002.

Before 2006, sale of mobile phone games was more than the online games, after that, the latter surpassed the former,