The main purpose of public libraries is to provide books and they shouldn’t waste their limited resources and space on providing expensive hi-tech media such as computer software, videos and DVDs. To what extent do you agree or disagree with this statement?

It is easy to see why some people say that libraries should not have CDs and DVDs. They fear that the traditional book will lose its appeal. Because of technology, books are now being converted into disc forms such as CDs and DVDs. Even the availability of books in the form of electronic media on NET is putting in danger the importance of the traditional libraries, which house only traditional books. Here, my argument would be that libraries have to keep in stock many copies of a single book. CDs and DVDs occupy less space and so the availability of CDs and DVDs in addition to books seems very practical because of the shortage of space in most libraries.

Secondly, one should keep in mind that a person goes to a library not only to search and get information from books but also to sit and study there. Some books, which are out of print or not available in that particular area can be accessed through CDs and DVDs. What is more, many students cannot afford the expensive hi tech media and Internet connection in their homes. It is well known that the Internet is an ocean of knowledge and students need to access it for assignments. Therefore, they can access all this in the library. Therefore, computers and the Internet should be available in libraries.

Another important point why people oppose such hi-tech media is that they fear that instead of using it positively students will use it for chatting and surfing objectionable sites. They have a point, but this can be looked into by blocking such sites in the libraries. My final argument would be that with the help of computers the records of the books in the library could be maintained very efficiently. For example, most modern libraries can be maintained by just one or two librarians, whereas earlier they needed a lot of manpower. 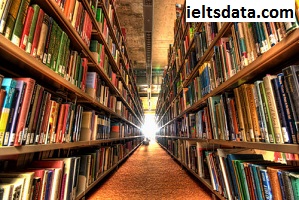 2 thoughts on “The main purpose of public libraries is to provide books and they shouldn’t waste their limited resources and space on providing expensive hi-tech media such as computer software, videos and DVDs. To what extent do you agree or disagree with this statement?”