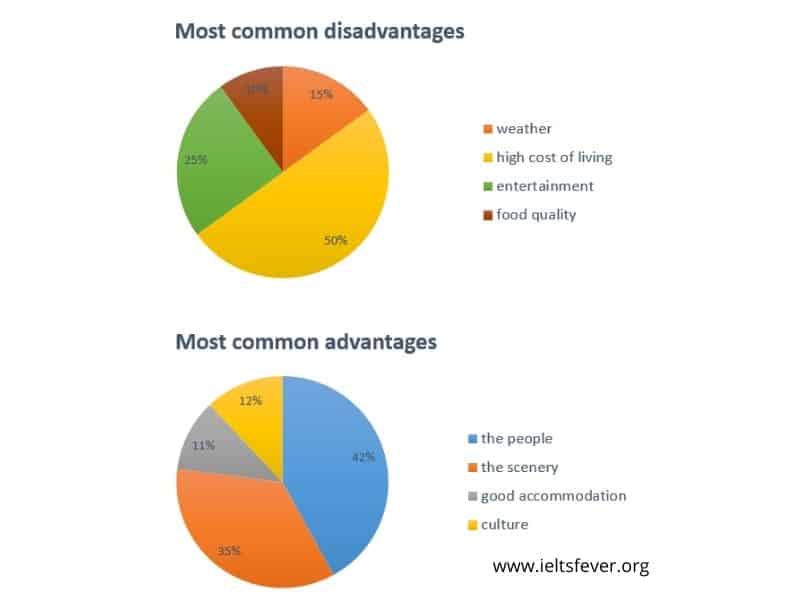 The pie charts below show the most common advantages and disadvantages of Bowen Island, according to a survey of visitors. Summarise the information by selecting and reporting the main features, and make comparisons where relevant.

Sample Answer of Advantages and Disadvantages of Bowen Island

The provided pie charts depict the proportional analysis of merits and demerits of an island namely Bowen as per the survey conducted on the visitors.

Overall, although the exorbitant price of living in Bowen is the major challenge, the people and the scenery of this place make it a happy stay.
In terms of the disadvantages, half of the pie chart is constituted by the massive living costs, followed by entertainment which is accounted for 25%. The other cons include not only the weather but the quality of the food also which have recorded a discrepancy of 5%, covering 15% and one in ten of the graph respectively.
As far as advantages are concerned, the significant proportion is taken by the people, recorded as 42%. The scenery of the island also makes up a moderate contribution of more than a third. In contrast, a smaller percentage of shares are observed in the case of good accommodation and culture which have shown resemblance, 11% and 12% orderly.